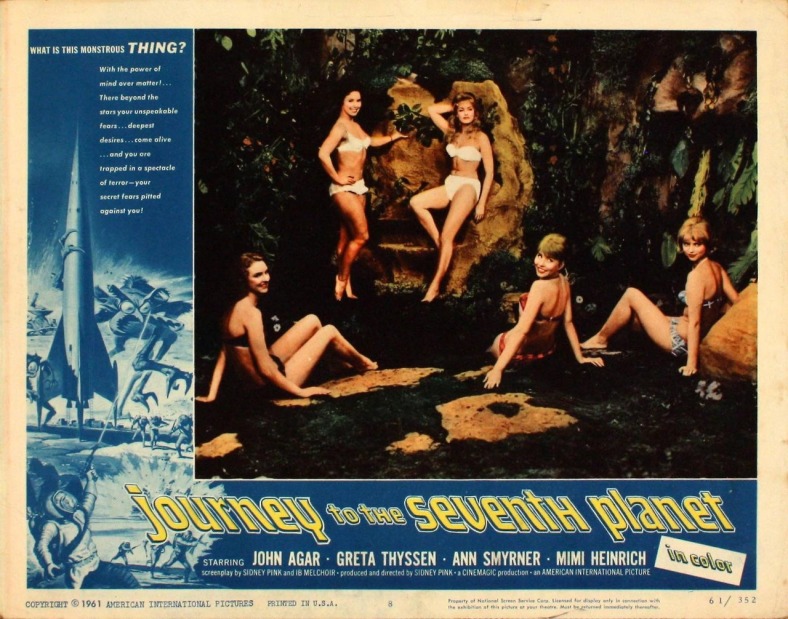 JOURNEY TO THE SEVENTH PLANET—-shot in Denmark in 1962, directed by the redoubtable Sidney W. Pink (“get me Pink!”), written by Pink & Ib Melchior (a Sid-Ib situation), who collaborated the year before on the mighty Reptilicus, one of the Worst Big Monster Rampage Movies Of All Time.  This snorer-hooter was done on a budget-strangled $74,600 (every krone not showing on screen) and starring Reptilicusican alumnus Carl Ottosen, who, alas, must yield billing to good old American sci-fi stalwart John Agar, as they end up in Uranus (hey, I’m just reporting).

Set in far-off 2001 (when, according to the proudly dumb script, the U.N. is in charge and there are no more wars), the team of really boring astronauts find the big gasball between Saturn and Neptune to be a place that looks—just like Scandinavia!—and has a bevy of curvy women showing up (just like Scandinavia!), as well as some lame monsters. The creatures are the type that kids could build better with two-by-fours, blankets and a few forks, and controlled by a big one-eyed brain (yes) that lives in a cave.  This is starting to sound pretty good, actually.

Uranus controlled by this: explain that to proctologist

Oh, there’s a kind of barrier around the sex-forest, and if you foolishly stick your arm through it, it freezes blue in a Uranusium minute.  With Peter Monch, Anne Smyner, Greta Thyssen and Mimi Heinrich.  Space-girls Smyner and Heinrich were also survivors of Reptilicus—who managed to demolish most of Copenhagen but left some of Denmark’s most, uh, gifted…actors unmolested.  Miss Thyssen was previously Miss Denmark of 1952, and rates about as va-voom as vava can voom.  She was the Danish  40-22-36 reply to Jayne Mansfield, Mamie Van Doren and sundry atomic bombshells, but did not bust through, as it were. Sorry for the curdled jokes, but this movie mines subtlety and brings it to the surface, for the good of all mankind, which, after all, is what space exploration is really about: ask the Pentagon.

So bad it’s good, but it sure felt like a major gyp when I saw it back in the mid-60s as a matinée.  One of the advertising tag lines was “A Trip Into Pure Hell.” Agar may have felt qualms over the screenplay, recalling he had already battled an alien think-organism, back on Earth in The Brain From Planet Arous, but then ‘qualms’, ‘script’ and ‘John Agar’ answer that question.