My name is Andrew and I will be your stalker tonight

THE SEDUCTION was a product of Embassy Pictures. As written & directed by schlockmeister David Schmoeller it would better suit Embarrassing Pictures, even though the 1982 leerfest makes for the big screen debut of TV siren Morgan Fairchild, panting hot after her servicing of lust on Flamingo Road.  Actually, the brainy Texan beauty had an uncredited bit as “blonde driving roadster” in A Bullet For Pretty Boy (go Fabian! as Pretty Boy Floyd! awesome!) twelve years earlier, but here she’s famous and naked, which was the reason this clodhopper made $11,378,000 even after critics roasted it on a spit.

Tag line: “Alone… Terrified… Trapped like an animal. Now she’s fighting back with the only weapon she has… Herself !”  Bring the family.

Glamorous TV reporter is stalked by psychotic fan. Camera lingers on Ms. Fairchild.  She flaunts her body.  She wields a shotgun.  All is as it should be.  We know it’s the early 80s because the opening credits are in pink neon against the nighttime blue of a swimming pool and Dionne Warwick is singing “Love’s Hiding Place” while Morgan does slo-motion laps in the nude.

Say what you want about Reagan, but this occurred when he was President, so maybe we judged him too harshly after all.  I know we’re supposed to be above shallow voyeurism but there’s a reason for sites like “CNNs Hottest Anchors” and it has little to do with economic statistics: some of us care. Perhaps a little too much—which brings back the whole Blonde With Shotgun Situation.  Great—left stranded by the sexual revolution, dependent on a crummy telefoto lens for companionship and all you get out of your vacation t-shirts are buckshot blood stains. The digression is strong with this one… 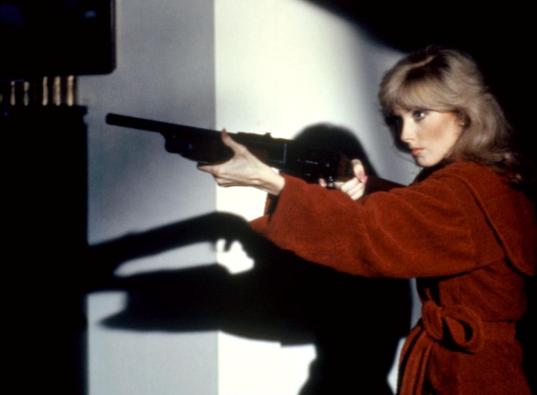 2 thoughts on “The Seduction”