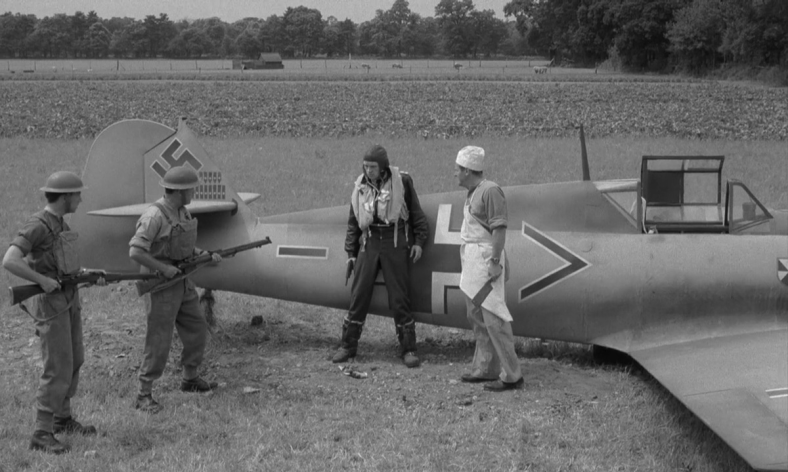 THE ONE THAT GOT AWAY —–dandy true-escape & survival WW2 adventure from England in 1957 tells the incredible story of Franz von Werra, the only German POW to get away from captivity in England during the war. * (hit the deck, Spoiler below!)

Very well directed by Roy Ward Baker (his next was the classic A Night To Remember) it calmly and steadily develops a goodly amount of suspense that increases with the ever-more-daring efforts of the cocky Luftwaffe officer over a well-measured 111 minutes in the screenplay from Howard Clewes.

Good location work was done in the Lake District of Cumbria in northern England and in Sweden for the later scenes set in Canada. Not a large-scale picture, but the production is well-handled enough to put over the period urgency and daunting physical scope of Werra’s exploits.  Effects shots of Ontario’s ice-covered St. Lawrence River (matched with the snow scenes done in nearby Sweden) are neatly crafted by cinematographer Eric Cross. Hubert Clifford’s music score is unobtrusive.

Set in war, it is both notable and welcome for an absence of violence.  Tension and some moments of humor prod the drama, which puts an “allied” audience in the odd spot of silently rooting for one of the by-definition Bad guys to get away, given his nerve, ingenuity and dauntless stamina.

The story would be whopper enough but the film succeeds largely through a superior performance as von Werra by the ruggedly handsome, compelling and charismatic 29-year-old Hardy Krüger.  He’d acted in Germany since he was 15, but took off internationally after the success of this picture (it did well in Britain and was, unsurprisingly, a big hit in West Germany): Krüger is in nearly every scene and carries the film on his shoulders with wit and assurance. ** 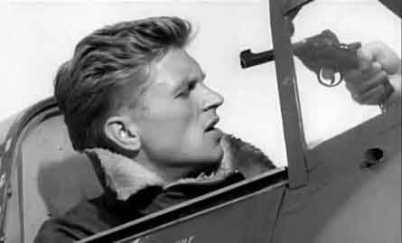 * Spoiler achtung!  Franz von Werra was a wild-man pilot, a Fraulein-magnet who kept a lion named Simba as a mascot. An ace, lauded in magazines in the Reich, his eventual Great Escape went through the neutral United States to Mexico, thence to Peru, Bolivia and Brazil, to Spain and back to Germany for a big welcome from Adolf himself in 1941. He died later that year in a crash, 27, a victim of mechanical bad luck and betting on the wrong warhorse. Wrong side, for certain, but the fellow bore some mighty clanking spheres of Unobtanium.

** I spent forty brain-warping minutes trying to calculate & convert £3,000,000 from 1957 to 2017 and gave the hell up.  Danke, nitzlos verdammtes, Internet!—let’s just declare Victory and say it made notable pounds, marks and bucks…  Oh, yes, Herr Hardy: the redoubtable and reliable Krüger had been put as a 10-year old into the Hitler Youth, then was drafted into the SS at 16. He fled and hid out from from those bastards, who ordered him shot for cowardice after his refusal to execute American prisoners. From a 2016 interview: “The memory of Hitler’s bust on my mother’s piano stands for a wasted childhood, a stolen youth, and a painful passage into the state of being human.” An escape artist in many senses, Hardy Krüger turned 91 in 2019.