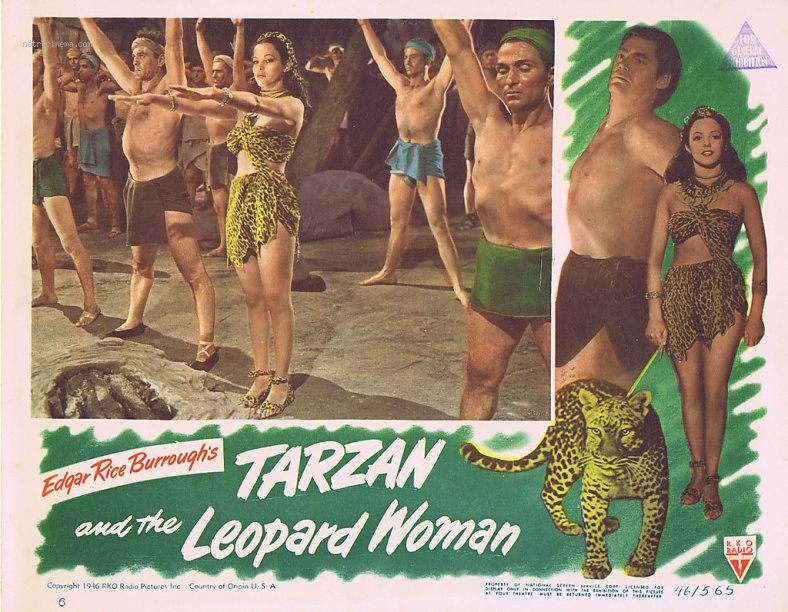 TARZAN AND THE LEOPARD WOMAN , seen again after more than five decades, this 10th entry in the Weissmuller series fairly demands renewed awe, except said awe is no longer the choke-on-tootsie-roll kiddie variety over the abundance of great “stuff”, but a cough-up-your-margarita seizure over its 72 minutes of complete nonstop lunacy. We’re talking “neato!”, “cool!” and “boss!” here, tribal elders. Two pitchers worth.

For kids, this was “neato!” because of Tarzan’s legend-earned habitat: his well-laid out pre-Swiss Family treehouse with happy, leggy Jane and happy, run & jump Boy, and maniacally happy Cheetah. It was “cool!” because of the semi-naughty attire of Mrs. T and especially the title’s high priestess in her cavern lair: brunette, ‘exotic’ (as much as kids grasped that) and, well…stacked (we grasped that without much effort). It was “boss!” because of the fiendish cult killers with their leopard-skins and claws (leopards being recognized as the ‘meanest’ of the jungle felines, kind of cat-Nazis) and for the resultant body-count when the Ape Man takes his justified revenge. They wanted to cut out Jane’s heart! They’re heart-cutters! Wipe ’em out!

Deep into the retrospective vision of the Mai Tai years (by the time the plot hits the first caravan ambush you’ll switch up cocktail armament—saving a Long Island for the temple-destruction finale), one can appreciate the treehouse refinements but note that Jane (Brenda Joyce, 29, her second of five leg-shows in the role) and Tarz (Johnny is 41 now) having little personal heat generation, are more into scoldish (tree)household chore pestering. Tarzan talks more this time than in previous episodes; a grand total of 30 lines, so book-learned Jane rubbed off on the big guy in one way.  Meanwhile, Boy (Johnny Sheffield, 15, his 7th outing) gets his own fight scene with the nasty rat ‘Kimba’ (Tommy Cook). “Kimba thanks kind lady with golden hair.” 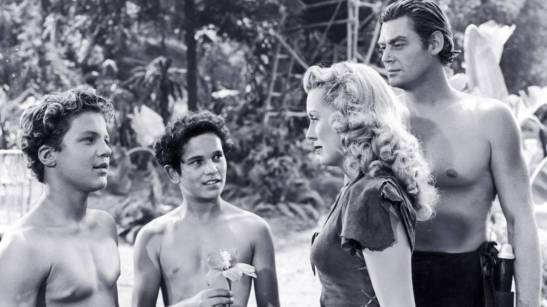 The acting is basically atrocious (actually Sheffield is passable), but as written by Carroll Young and directed by Kurt Neumann, the story, dialogue and situations would challenge–and defeat—the best in the field. One good actor who shows up is veteran bad guy Anthony Caruso, playing a scowling, barechested attendant to the anti-social main vixen. As ‘Mongo’, Caruso may have hit the quality low-point with this, buried among his 259 credits, but he gives it his professional best, and no doubt laughed about it afterwards. 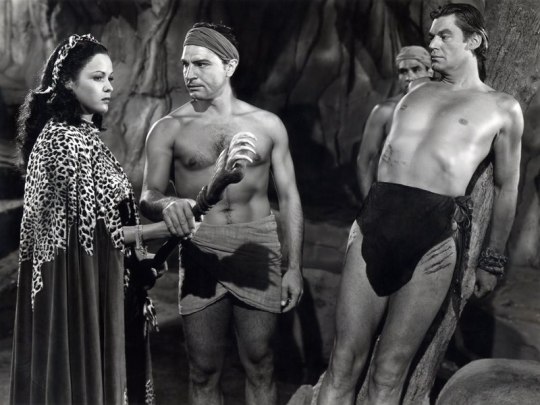 Look, at 5, we’ll all drive over to the Valley and get plastered

The rumble in the jungle in this one is jointly stirred up by resentful ‘native’ ‘Ameer Lazar’ (Edgar Barrier, likely embarrassed and pretty awful, channeling Hitler) and the immortal Acquanetta as ‘Lea’, the high priestess of the leaping Leopard loonies.  Barrier would go on to redeem himself playing ‘Banquo’ in Orson Welles 1948 Macbeth.  The va-voomascious but normal-word-speak-challenged Acquanetta, who considered this a move up from her earlier triumphs like Captive Wild Woman, at least gets to pronounce verdicts like “And the man that interfered his fate too shall be death. Right before he dies, he shall see his woman and his boy slain“.  *

You really need to see this for the batshit-insane dance done by the disciples of the Leopard Woman, and for the Normandy-scale casualties when Tarzan goes ape on these peace-spoilers. He knifes them, drowns them, lures them to fall onto stakes in a pit and then crushes them en masse ala Samson. This is followed by closeout shots of the smiling heroes, cheerful again having just slaughtered scores of extras. The casual violence for a kiddie flick is noteworthy, but then, WW2 just ended and jazzed-up youth needed to dish out kicks on somebody. Also of sociological interest is that this time there are, like, no black ‘Africans’ in the never-wherever part of the continent our heroes swing in, so maybe there was some ethnic population shift left out of the history books and the cultural brain trust at R-K-O decided to use this forum to reveal it. 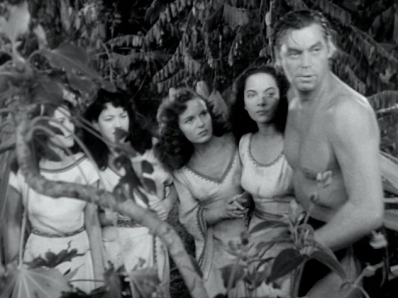 We will be gallant and credit that the four threatened Zambezi maidens (whose hearts, alas, are also be forcibly removed), kidnapped after their guards have been clawed up by the pouncing leopard dudes, were played by hopefuls Helen Gerald, Kay Solinas, Iris Flores (when she arrived in New York from Costa Rica, she turned down a date with JFK) and— “Miss Central America of 1945”—Lillian Molieri. Probably tickled to be in a movie, even this one, they shyly smile and pretend to look terrified. With Dennis Hoey, Louis Mercier and Syrian wrestler ‘King Kong’ Kashey as ‘Tongolo the Terrible’ (nice mane of back hair–yeuckk!)  Paul Sawtell earns his keep and provides a full-bodied score. Fans lined up to the tune of $3,400,000, ranking #90 for 1946.

* While Acquanetta would go on to become a DJ, marry a car dealer and reign as a celebrity maven in Phoenix, Brenda Joyce opted to call it quits following 1949s Tarzan and the Magic Fountain and dedicated herself to family life and the laudable work of resettling refugees. In 1985, she recalled Weissmuller was “a vulgar man–his conversations were very earthy, and I’ve heard a lot of earthy conversations.”

Fork over that lunch money

After 1948s Tarzan And The Mermaids (his #12 and safely the bottom of the lagoon), Johnny turned the loincloth and recorded Yell over to Lex Barker and put on a bush jacket and pith helmet for 13 adventures as Jungle Jim.

Sheffield did one more gig as Boy (in Tarzan And The Huntress) before striking out on his own as Bomba, the Jungle Boy. He played that sturdy lad 12 times through 1955. He offered this more gracious take on Weissmuller: “I can only say that working with Big John was one of the highlights of my life. He was a Star (with a capital “S”) and he gave off a special light and some of that light got into me. Knowing and being with Johnny Weissmuller during my formative years had a lasting influence on my life.”

As irony would have it, when Johnny Sheffield died of a heart attack in 2010, at 79, he’d fallen from a ladder while trimming—-a palm tree.