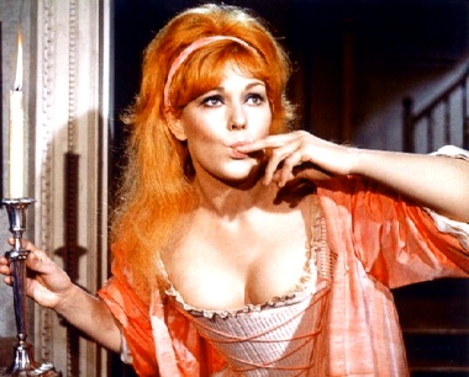 THE AMOROUS ADVENTURES OF MOLL FLANDERS fared ne’er-did-well in 1965, drubbed by reviewers and coming in 44th place among earners. Attractively festooned, sporting a gorgeous leading lady, an interesting supporting cast, and a hot director, the bawdy adaptation of Daniel Defoe’s 1722 classic tries so hard to ape the frantic style and wild success of Tom Jones that it quickly self-suffocates, laboring painfully through mostly forced liveliness for a rowdy but oddly dull 126 minutes.*

Lust-inciting and wistfully willing maid Moll sleeps her way across a cutaway of 18th-century English society, country manor to London squalor, poor to rich to poor and back. Noblemen, highwaymen, scoundrels and tarts abound, bosoms struggle to burst free from bondage. Terence Young had a decent track record with period adventure films (Zarak is a lot of fun) and had just scored back-to-back big hits with the sexy Dr.No and From Russia With Love, but things just feel lead-footed and obvious here. 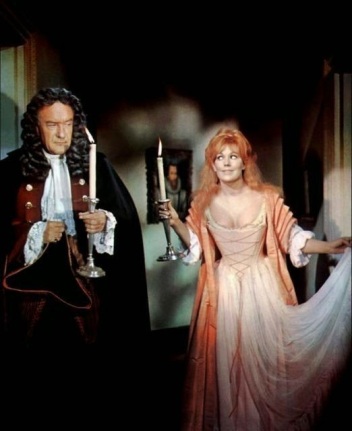 Kim Novak at 32 is great to look at, an eye-watering visage with a wild mane of hair (haystack tackling variety) and low-cut cleavage (spice’a life display), but comedy was not her forte, and her English accent doesn’t cut it. The lackluster reviews (never kind to her) and tepid box-office made this her fifth disappointment in a row and she stayed away from the screen for three years afterwards. **

Some droll lines pop up here and there (George Sanders is on hand) and one really sparkling supporting performance comes from the lovely and effervescently naughty Lilli Palmer; merriment saves every scene she’s in.  Others on leer-duty: Richard Johnson, Angela Lansbury, Leo McKern, Vittorio De Sica, Hugh Griffith, Derren Nesbitt, Cecil Parker, Daniel Massey, Roger Livesey, Anthony Dawson, Richard Wattis, Michael Trubshawe, Liam Redmond and Noel Harrison.  Uncredited in cameos are Bernard Lee and Desmond Llewelyn.  This grossed around $5,400,000 in the colonies, but did come in 13th over in Britain.  Terence Young promptly aced a monster hit with Thunderball. 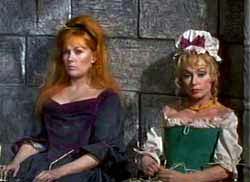 * Dafoe’s novel beat Henry Fielding’s heftier 1749 “Tom Jones” out the gate by two decades: they both likely influenced at least one famous heavy-breathing  bodice-ripper from the 1940s, “Forever Amber”.  The full title of Dafoe’s tome was “The Fortunes and Misfortunes of the Famous Moll Flanders, &c. Who was Born in Newgate, and during a Life of continu’d Variety for Threescore Years, besides her Childhood, was Twelve Year a Whore, five times a Wife (whereof once to her own Brother), Twelve Year a Thief, Eight Year a Transported Felon in Virginia, at last grew Rich, liv’d Honest, and died a Penitent.”  Common usage had it simply known as “Moll Flanders”, but maybe scenarists Dennis Cannan (A High Wind in Jamaica) and Roland Kibbee (The Crimson Pirate), along with director Young favored adding The Amorous Adventures Of-— to the marquee, to both distinguish it from and hint broadly at the same zany bed-hopping of Tom Jones (the film, since most people would never have read either book). Didn’t help. 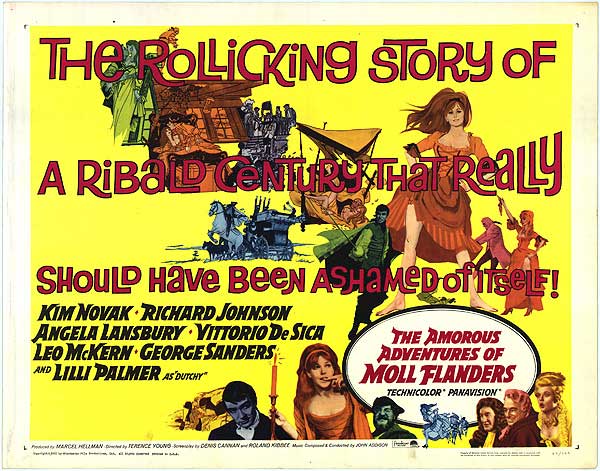 ** Miss Novak got something out of this dud: she fell for Richard Johnson and they got married (a 14-month situation). After her strong run in the 50s, she had a good start to the decade with 1960’s Strangers When We Meet, but then Boys’ Night Out and The Notorious Landlady drooped in ’62 and she really got hammered by the 1964 double ker-thuds Kiss Me, Stupid and Of Human Bondage. The three-year hiatus she took after ‘Flanders‘ fizzled was followed by further career damage when she absorbed a lot of the flak for 1968’s fiasco The Legend Of Lylah Clare and the expensive bomb of The Great Bank Robbery a year later.  Big Sur and painting beckoned: sleazy Hollywood, snarky critics and press pressure could take a hike. 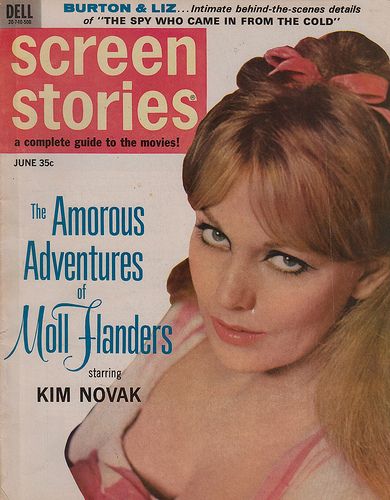