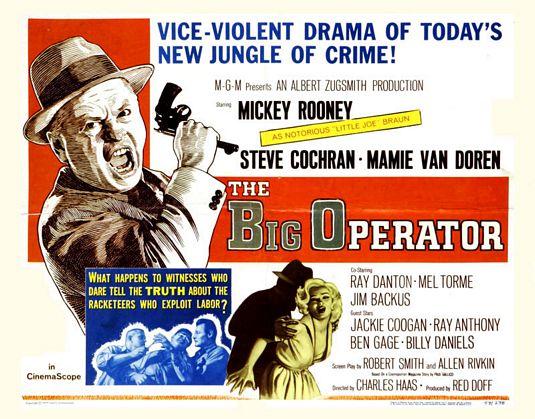 THE BIG OPERATOR didn’t operate in a big way in 1959: post-operative box-office findings show it at 116th place, with a gross of $680,000 against an already bargain tab of $527,000 resulting in MGM getting soaked for 253 g’s.  Poorly directed by Charles F. Haas, with some daffy casting and writing, and a heavy dose of nasty violence–especially for the day—it’s not much of a movie, but it does feature a typically excellent performance from Mickey Rooney as the title racketeer.

“Little Joe” Braun’ (Rooney) conducts his job as a labor union boss with gangland-style intimidation. Impatiently stonewalling investigators, he has his goons take care of anyone who might upset their rotten applecart. Honest machinist and swell family man ‘Bill Gibson’ (Steve Cochran) and his plucky buddy ‘Fred McAfee’ (Mel Tormé) find out the hard way what happens when Little Joe thinks you’re too wise of a wise guy.

Normally cast as a tough, Cochran plays a ‘good Joe’ to the Mick’s little bad one, and as a result he gets viciously worked over by Ray Danton, Leo Gordon and Norman Grabowski, while buddy Mel gets turned into a Tormé torch, which provides Rooney with the gift to bark the movie’s signature great-bad line “You don’t set anybody on fire unless I tell you to, you understand?!” 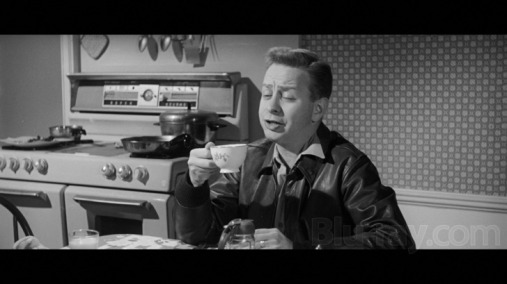 This is after one guy has already been sapped and dumped into a cement mixer, but before Cochran’s son ‘Timmy’ (Jay North) has been kidnapped. Mom is played by Mamie Van Doren, a subversive joke for all kinds of reasons. *

The climactic donnybrook is laughably staged, but the Mel-as-toast scene is fairly harrowing, and the brutality dished out on Cochran seems designed to out-do the violence factor that was getting heat at the time on TV with The Untouchables. **

Though the writing and direction are third-rate (like Mel’s 3rd-degree burns, which magically don’t keep him down so he can participate in the foolish finale fight), and Van Doren is hopeless whenever she is tasked with a line, the ever-ready Rooney makes the most of his job. The five-two dynamo never phoned it in or took anything lying down (except every starlet within reach) when it came to performing. At 39, wife #5 at home (three to go), he was in gear with a slew of gangster parts that lasted from Baby Face Nelson in 1957 until 1961 and King Of The Roaring 20s: The Story Of Arnold Rothstein. This same 1959 he was also malevolent in The Last Mile.

* Va-voom Van Doren isn’t who you think of when the word ‘shy’ comes up. Probably the most blatantly sexually aggressive actress of her era, she was great at thrusting portions of herself provocatively in whatever direction favored silhouettes or sweater contours, but when she had to do something like show believable reaction or speak dialogue, she wasn’t exactly a threat to Deborah Kerr. Having her play mom-next-door ‘Mary Gibson’ (to ‘Dennis the Menace’, no less) didn’t come from left field—more like Outer Space.  26 at the time of this turkey, she was romping with co-star Cochran (they’d just finished The Beat Generation for director Haas) while still married to Ray Anthony  (she called him ‘Ray Agony’), who is also in the film. She was quite busy otherwise in ’59, peeling paint in Girls Town and Guns Girls and Gangsters.  Undeterred, in 1960 alone she would distinguish The Private Lives Of Adam and Eve (with Rooney), College Confidential, Sex Kittens Go To College and—what else?—Vice Raid.  A character. 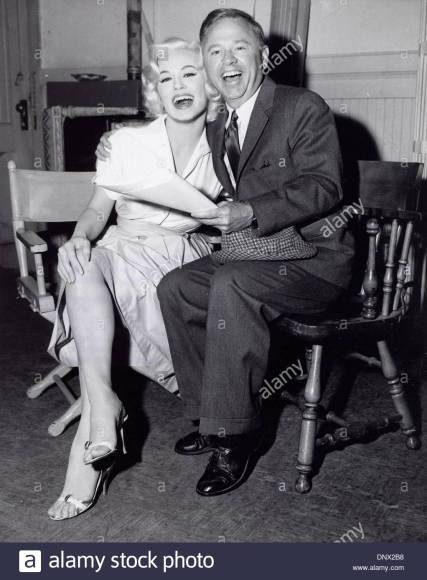