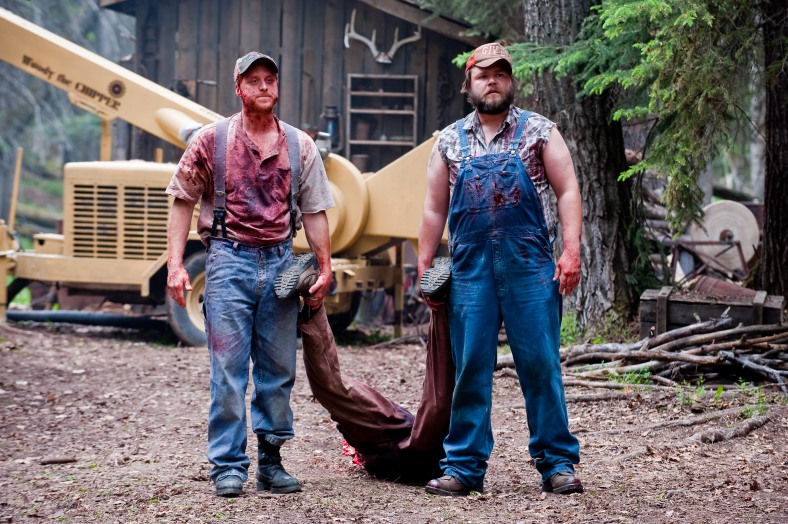 TUCKER & DALE vs. EVIL —-a sheriff pulls over the good ‘ol boys of the title.  SHERIFF:  “Where you two headed?”  TUCKER: “We’re headed to our vacation home up by Morris Lake. I sank every penny I had into it… me and Dale here, we’re gonna’ go fix her up, then do a little fishin’. He’s been strikin’ out by the ladies, I figure a little man-time might do him some good.” SHERIFF: “There ain’t nothin’ up there but pain and suffering on a scale you can’t even imagine.”

2010 comedy-thriller takes the done-to-death horror trope of city dwellers at the mercy of backwoods brutes (which is really just a casually accepted reverse racist & classist put-down of poor white people) and flips it to funny, even endearing effect as likable hillbillies ‘Tucker’ (Alan Tudyk) and ‘Dale’ (Tyler Labine) fight for their lives against a group of college kids who have a bad attitude to start with, compounded by a cascade of absurdist violent episodes– cleverly exaggerated for black comedy guffaws.  Even at just 89 minutes it runs over, but the leads are swell, and the plot’s wacky wickedness doesn’t leave you feeling like a guilty dog.  Directed by Eli Craig, who wrote the quippy script with Morgan Jurgenson. It deserved better than it’s $4,700,000 reception. With Katrina Bowden (sexy enough to induce cardiac arrest–seriously, she should come with a warning), Jesse Moss and Chelan Simmons. As Dale laments to one of the coeds who spurned him and then apologized,”Don’t be sorry, it’s my fault. I should have known if a guy like me talked to a girl like you, somebody would end up dead.”