THE WORLD IS NOT ENOUGH —-remember all the great stuff from this one?  Me neither. Pierce Brosnan again does what he can with a boring plot, this one involving oil pipelines, renegade ex-KGB agents-gone-terrorist and.. it’s just not important.  Decent bad girl antics are exhibited by Sophie Marceau, and pretty Denise Richards plays a nuclear physicist, which was good for a number of derisive snorts back in 1999.

It was the final mission for dear Desmond Llewelyn as ‘Q’, retiring after 17 bats at the role over 36 years. Tragically, he died in an auto accident just after the filming.  Desmond survived five years as a POW of the Nazis in WW2 only to be killed in a head-on collision coming back from a book signing. He was 85.  A quote from the man: “I am hopeless with gadgets. I can’t even get a ticket to work in one of those confounded machines in the London Underground. And I can hardly put on a kettle, let alone set a video.” 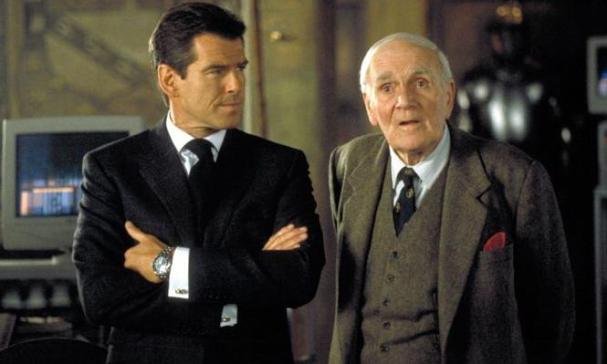 The End, but James Bond will be back….

One thought on “The World Is Not Enough”

Leave a Reply to In My Cluttered Attic Cancel reply