BETTER LIVING THROUGH CHEMISTRY —-keeps you amused, thanks to its audacity (uncomfortable for some) and from the valiant work of the continually engaging Sam Rockwell.  A doormat pharmacist seeks freedom from his zombified home life by engaging in a madcap, drug-fueled sex-binge with an equally dissatisfied trophy-wife, one of his drugstore customers.  Two-thirds of the way, its momentum holds (it starts with a bang in a marvelously cute title sequence), then it unwinds into itself for a limp payoff. 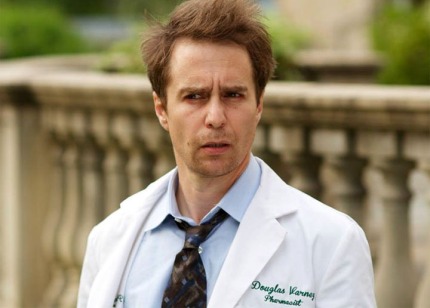 Olivia Wilde is tre-sexy, Ray Liotta shows up–always a treat, Michelle Monaghan and Norbert Leo Butz do as much as they can with the writers synthetic creations.  Ken Howard overacts abominably and Jane Fonda’s narration and swoop-in appearance at the end rings utterly false.  Rockwell rules.  If you’ve got 91 minutes to throw around, you could do both worse and better.  The 2014 black-comedy got slammed big-time by the press and only made a piddly $100,000, scratching way down at #198 among the year’s releases. Ouch! Directed by its writers, Geoff Moore and David Posamentier.

From the How To Seduce Your Pharmacist Manual