THE PRIDE OF THE YANKEES  was the 7th most popular movie of 1942. The box office take of $8,080,000 would translate to around $226,000,000 today; among the five dozen or so movies centered around baseball, with that inflation adjustment factored in this tops the roster. For generations, it’s remained the sentimental favorite centered around that quintessential American pastime: the last ten minutes are a sure way to check tear ducts.*

A top-rate Hollywood-heyday biopic, it covers the life of hero-worshiped Lou Gehrig, from working as a waiter to get through Columbia University, onto his sign-up with the Yankees and fame as the team’s first baseman, including being part of their fabled 1927 lineup. Directed by Sam Wood, the first half of the 127 minute show is a very smooth series of vignettes showing Gehrig’s prowess on the field and his warm family background. The second half deals with his marriage and concludes with his farewell to 62,000 fans at Yankee Stadium, following 2,130 consecutive games (including 7 World Series). Stricken by ALS, Gehrig found steadily encroaching paralysis too lethal an opponent to play against. 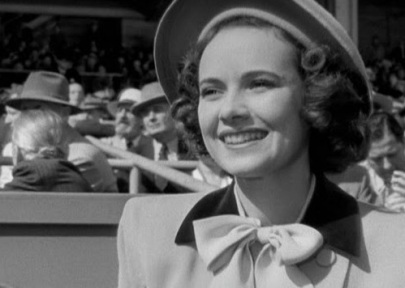 Much of the happy-home goo is cloyingly written, but Gary Cooper’s performance is so charming and persuasive and those of Teresa Wright as his wife Eleanor, and Elsa Janssen and Ludwig Stossel as his parents are so steady that it’s a cinch to bat away the pitched cornballs. Composer Leigh Harlines intrusively sweet musical underscoring of the cute stuff is a liability, but he does orchestrate some effective ballpark themes in other parts of the story.

Walter Brennan and Dan Duryea as sportscasters, a swell turn from Babe Ruth as—who else?, and the dignified heart tug at the finale all earn plaudits in a physically handsome production.  “Is it three strikes, Doc?” More like a home run.

* Other sites online get into the mix of coaching and camera-fiddling needed to make right-handed Cooper convincingly sell the part of the leftie Gehrig. Amusingly, the all-American actor wasn’t a baseball fan and needed extensive coaching so as to look passable on a diamond.  At 40, he’d never even played the game before, even as a boy, hadn’t even seen a game in person until he was signed for this movie. He pulled it off (so we could breathe easy and concentrate on WW2), and became a fan of the sport.  As to stats (which baseball fans require as much as hot dogs), factoring inflation, the eight most successful baseball movies are, in batting order, The Pride Of The Yankees, A League Of Their Own, The Stratton Story, Take Me Out To The Ball Game, Field Of Dreams, The Bad News Bears, The Natural and The Babe Ruth Story.