ALLIED—well produced 2016 period drama is a throwback to old WW2 movies about espionage, with romance mixing into the danger. Appealing stars and a good look make for an entertaining 124-minute dip into nostalgia, duty and sacrifice.

1942 in Casablanca: two allied undercover operatives, one Canadian (Brad Pitt), the other French (Marion Cotillard) meet, complete a mission, fall in love. The war goes on, and dark questions about motives shake the relationship. Are you who you say you are?

Directed by Robert Zemeckis, it is complemented by smart use of CGI effects, nicely lit sets, neat costumes and props and punchy sound effects. The supporting cast is so-so, and like so many recent movies about WW2, it takes some questionable attitudes regarding behavioral decorum, but the star-power from Pitt and Cotillard carries it over any bumps. With the first act taking place in Vichy-run Morocco, the inevitable ghosts of Bogart & Bergman trace faint shadows, but the crew here aren’t trying to re-invent the wheel as much as just rolling out a sleek and shiny spare, more along the lines of, say, a solid Alan Ladd & Hedy Lamarr model, and it all moves smoothly. A decent date movie. 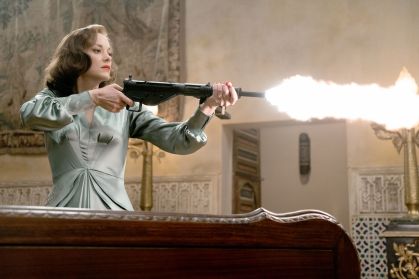