HUMAN DESIRE—-sordid crime & lust triangle did not do well in 1954, 103rd on the tally sheet for moneymakers. If it didn’t have famous names attached to it, it would be a forgotten B-picture programmer, like a cheap crime novel you read once out of boredom and dump at a garage sale for a dime. Published in the 50s and this sort of hard-breather would at least have a nifty suggestive cover.

“All women are alike. They just got different faces so that the men can tell them apart.”

The asking price goes up since its source,”The Beast Within”, was an 1890 novel by Emile Zola, (so instead of pulp it’s literature) had been done in 1938 by renowned French director Jean Renoir and this remake is signed off by Fritz Lang (so it’s cinema instead of programmer) and stars Glenn Ford, Gloria Grahame and Broderick Crawford (call it noir instead of ‘one week only’).

“It’s much better to have good looks than brains because most of the men I know can see much better than they can think.” 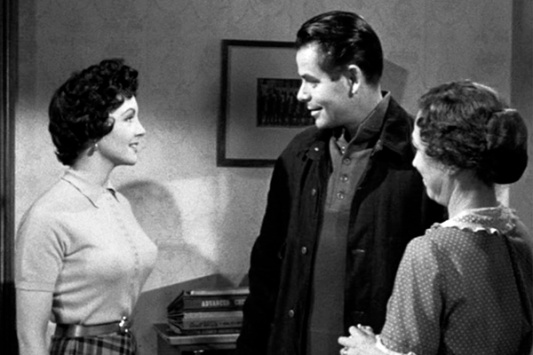 If that seems harsh, it’s not so much a backhand against the film, which maintains cheerless momentum effectively enough to keep your attention for 91 minutes, but rather smoke blown (preferably from an unfiltered Camel or Lucky Strike) at the predictable somersaults besotted critics will do, falling in line to out-fawn the next Serious Student of Film in order to elevate an ‘assignment picture’ to Overlooked Statement status because of the attached names.

Hot-tempered railroad worker Crawford gets tease wife Grahame to wile back his job, then kills the guy she worked on, and bats her around. Starts boozing. Train engineer Ford falls for Grahame (in about twenty seconds), they heat up, he knows she’s no good but can’t help it. Murder guilt and Brod’s jealous hulk threaten to spoil their already rotten affair.

Ford has little to do, not so intense as much as bored, Grahame is needy and trampy, again, Crawford handily brutish, again (he does a good staggering-drunk act: practice made perfect). Starlet Kathleen Case has mid 50s va-voom curves (bras designed by Northrup Grumman to withstand 4 Gs) but little in the way of acting chops.

Cameraman Burnett Guffey gives it a sharp black & white look to compensate for cheap sets and Lang has some great exterior footage of locomotives (sharp eyes reveal the same overhead shot of a train pulling into station used three different times, per budget or indifference). Music score from Daniele Amfitheatrof is rather lackadaisical.

With Edgar Buchanan, Paul Brinegar and Dan Seymour. Lang’s derisive comment on the title: “What other kind is there?” 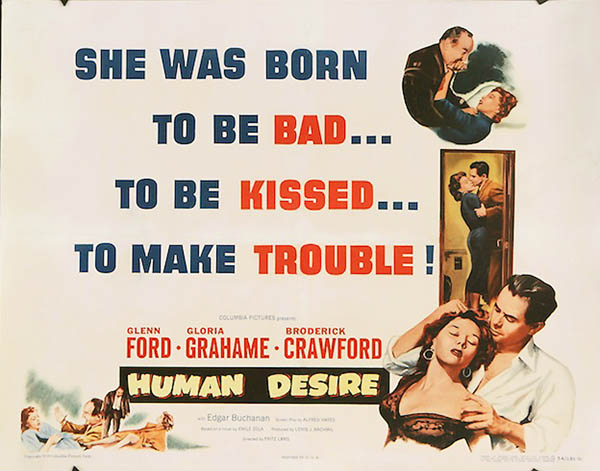