FAREWELL, MY LOVELY  made some impact with critics and nostalgic fans back in 1975, reawakened to the seedy elegance of a time gone by, thanks to the period styling of The Godfather and Chinatown, and glad to see an emblematic noir star—older but still hip Robert Mitchum—back in harness with trench coat, fedora, snubnose .38 and broken-nose attitude.

“The room was full of smoke… The smoke hung straight up in the air in thin lines; straight up and down, like a curtain of small clear beads. It didn’t dissolve; didn’t float off; didn’t move… It was a grey web woven by a thousand spiders… I wondered how they’d got them to work together..”

What was welcome retro forty years back (gulp!– a full decade more dated than the one it was revisiting) now seems self-consciously artificial (retrospect of retrospection). The 30s and 40s recreated for Chinatown and the Corleone’s were played straight and their history-tinged crime stories were believable.  Although directed with clear affection for the genre by Dick Richards and written by David Zelag Goodman to mimic Raymond Chandler’s 1940 novel (incorporating text in the narration), this doesn’t recreate, it merely evokes, and the evocation then slinks as pretend, copy of a copy, since Chandler’s milieu and the shadow-land of those old cop & hood flicks were themselves just stylizing reality.  Like the comedies that spoofed spy spoofs, it has an air of ‘Retread City: Population Tired’.  Amusing, with some sterling attributes, but not at all convincing during its wisely brief 95-minute tail chase.

“I sparred with the night clerk for a couple of minutes, but it was like trying to open a sardine can after you broke off the metal lip. There was something about Abraham Lincoln’s picture that loosened him up.”

A moody score from David Shire is a plus, with a stuffed array of carefully displayed props and locales, and beat-up turf around Hollywood and Echo Park, wreathed in neon-lit cigarette smoke by John Alonzo’s cinematography.  Even so, a good cast can’t breathe enough energy into a lethargic pace, obtuse narrative and an overlay whiff of camp. Mitchum plays Philip Marlowe as weary, but he’s too old at 58—twenty years beyond the character conceived by Chandler—to generate the excitement and danger factor needed to brace the faux poetic cynicism.  Listening to him recite the voice-over narration just reminds you you’re hearing not Marlowe in ’44, but Bob Mitchum in’75.  Fair enough, but it’s largely affection for the genre and admiration for the actor that keeps it together.* 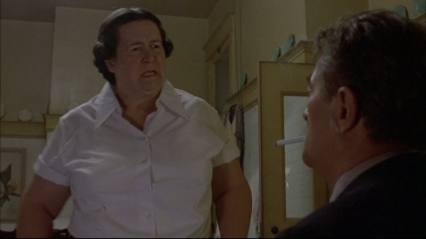 Murder, My Sweet, the 1944 version with Dick Powell, still holds its own.  Miles pulled an Oscar nomination as Best Supporting Actress for her whiskey-inhaling former dancer turned floosie.  Costing $2,500,000 to make, this came in 73rd among breadwinners for 1975. A return to what were perceived as halcyon days was a swarmed theme that year, with The Great Waldo Pepper, The Day Of The Locust, Capone, The Black Bird, Funny Lady, At Long Last Love, Lepke, The Hindenburg, Lucky Lady, The Wild Party and the toughest, least pretentious, easily best of the lot—Hard Times. 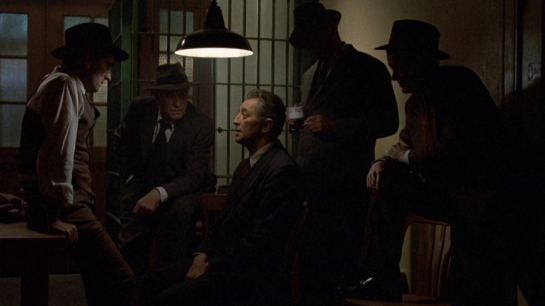 * Apart from Ryan’s Daughter, where he was able but miscast, Mitchum had mostly phoned it in for a decade. Then, from ’73 to ’75, he hit a mini-comeback triple with The Friends Of Eddie Coyle, The Yakuza and this.  Interest seemingly spent, he picked up the phone again and put energy on hold for nearly everything he appeared in during the remaining 22 years of his career.  It’s almost as though the ‘been there, pal’ Philip Marlowe voiceover that ran inside Mitchum’s own bullshit-detecting wiseguy knew putting on the private eye trenchcoat that one last time closed the solid case he’d made for himself since 1943. 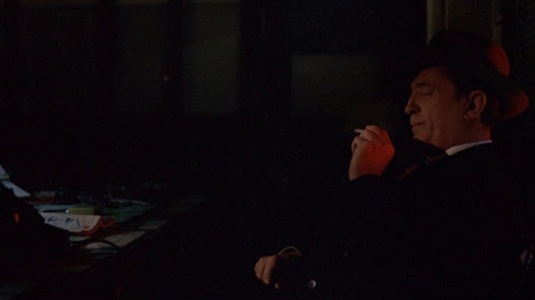