THE MAGNIFICENT SEVEN has excellent cinematography.  The 2016 version of a movie folklore pillar reminds us that, as in a gunfight, timing is crucial. In the 50s trotted the ‘adult’ westerns, opening the genre to the nuance and indulgence of psychological introspection.  Hip 60s Europe galloped out the stylized ‘spaghetti’ westerns, operatic homage/ send-ups.  Then limped the ‘revisionist’ posse, dull brown, laden with layers of guilt. With the blithe, suffocating, infuriatingly smug ascendancy of p.c. (put in lower-case, so we don’t offend anyone left out by capital letters) this violent remake qualifies as a Fast-Food Western. The camera work makes it look like something palatable, but the tasteless ingredients are shipped in from factories, the prep-line left out the lettuce, overdosed on salt and didn’t melt the cheese, the shake is too thick to go through the straw. Nutritionally, it’s an ambush, you’re still famished, pissed-off that you wasted money on heartburn and a belly-ache. It has excellent cinematography.

Blast a hole through to Fences

The late James Horner started on the score, but passed away in 2015. His longtime associate Simon Franglen took over, but recognizable Horner cues are in there, some sounding like faded re-use of pieces from his score for Braveheart. Working in the echoes thundered by Elmer Bernstein’s 1960 score, one of the most familiar, beloved and exciting soundtracks ever composed, this somber accompaniment fires a muted blank. 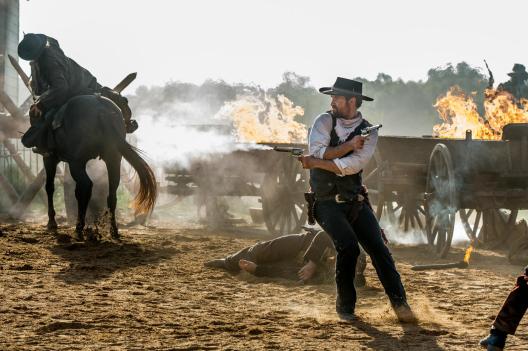 As to firing blanks, there is more ammo ripping through the Arizona/New Mexico  locations here than was expended during Gettysburg, in action scenes that lose all validity in their excess. There’s overkill and then there is the downright idiotic, confusing, involvement-absent mayhem orchestrated here (further undermined by dull sound effects that sap punch)—the finale slaughterhouse is laughably bad. Everyone look’s alike (another modern western cliché: no-one has apparently ever cleaned dirt off their face), tension evaporates over 133 minutes, posing dominates, casualties reach the stratosphere. Why use two bullets when 27 will do?  A cowboy flick for gang-bangers, geared as much to that reduced mentality as it is larded with representing every demographic in America—wait, where are the midgets?  All it lacks are same-sex outhouses.

Costing $90,000,000, earning $160,000,000 worldwide, it may be embraced as cool by viewers unfamiliar with the genre, but anyone who knows and loves it—and who respects film history—will want to saddle up the DVD horse and slap on the original.

Yes, the average frontier girl with lowcut blouse who can handle rifle and does not take crap from mere men gunfighters

As to ‘original’, screenwriters Richard Wenk and Nic Pizzolatto, in harmony with director Fuqua, made ado about basing this tripe on 1954s Seven Samurai, the inspiration for the 1960 John Sturges showdown. Nice, then, that they pretend to honor Akira Kurosawa, and his writers (Shinobu Hashimoto and Hideo Oguni) as if that nod graces their ripping off lines and scenes from the Sturges film and its script, written by William Roberts. Just more of this movies blatant  p.c. suckup—Kurosawa’s samurai epic was inspired by—that’s right— westerns. Domo arigato, pardner.

Lee, best man in the cast

The actors do what they can, but the mouthfuls of gobbledygook they are issued would choke a buffalo.  Washington at least salvaged the year with one of his all-time best performances, in Fences.  Credit can go, without reservation, to one member of the production team, cameraman Mauro Fiore: the cinematography is excellent.