THE LION—-unfairly dismissed by critics in 1962, lagging in 65th place at the box-office with a gross of $3,400,000, is a stunning visual time capsule of Kenya, teeming with game and has a cast & crew pedigree to bolster its compact 94-minute telling.

An 11-year-old girl has grown up on an isolated East African game reserve with her mother and stepfather, a former hunter now game warden. Fretting that the nearly feral child needs education, worried about her safety and sanity since the girl has adopted a lion, now full-grown, as her pet, the mother asks her ex-husband to intervene, though he and the child have never bonded. Growing pains, competing affections, and natural elements trigger the drama, interspersed with invigorating and dangerous forays into the animal world surrounding them.

William Holden (the ex-husband) fell in love with Africa during a safari. In 1959 he plunked down investment on the Mt. Kenya Safari Club, which soon became a ‘must’ for jet-setters, royalty and celebrities. Jack Cardiff, directing, had previous African experience as a cinematographer on The African Queen and Legend Of The Lost.  He’d just scored an Oscar-nominated hit, Sons And Lovers, with Trevor Howard (the game warden husband), who had put in his arduous bush time in ’58, surviving the disease-plagued shooting of The Roots Of Heaven (fortified against malaria by drinking heavily with Errol Flynn). 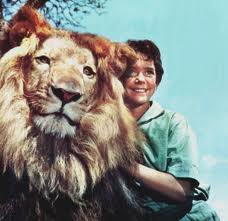 31-year old French beauty Capucine (the mother), fresh off a hit with North To Alaska, fell madly in love with Holden, and vice-versa. The girl was 11-year old Pamela Franklin, a remarkably intelligent child who was given the task of befriending ‘Zamba’, the full-grown lion of the story, and playing with the mercurial cat.

Looking at scenes of Franklin rolling around with the 530-pound feline, riding on it, have an extra nervy factor. Two men stood by with rifles trained on Zamba because, as Cardiff mused “it was a lovely lion, but you had to be aware of the fact that any lion could suddenly snap.”*

The actors are all fine, Malcolm Arnold gives it a full-bodied score, and Edward Scaife’s camera drinks in the splendor of the herds and scenic contours on location in Kenya, Tanzania and Uganda.  Mount Kenya looms in the background, as it does from the grounds of Holden’s beloved hotel.  This wildlife-saturated film was lost in the wake of 1962s other African adventure, the more lighthearted Hatari!  Like that, this features some close calls, not just with rhinos, but with elephants and hippos—the second unit guys took some real chances getting their footage on this jaunt.** 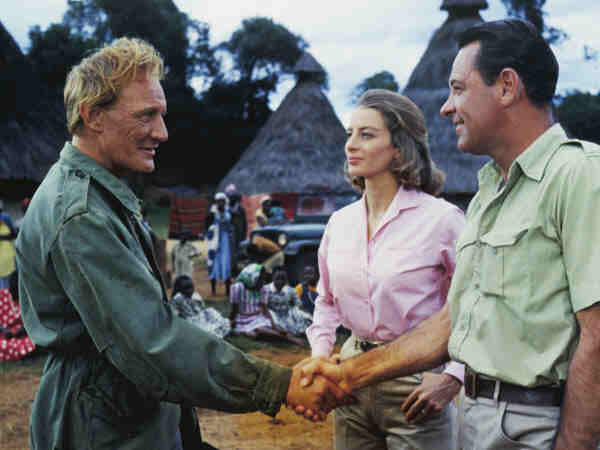 * The gentle Zamba lived to be 18, and was featured in 30 films and TV programs. His trainer, Ralph Helfer, wrote about the adopted orphan friend in “Zamba, The True Story Of The Greatest Lion That Ever Lived.” A rumor that Zamba had killed a menstruating woman on a job prior to working on this movie can’t be substantiated and may just be more speculative movie gossip.

** However dicey this shoot may have been (Franklin got bitten by another cat, Holden & Capucine going gaga, heavy rains, etc.), for Howard it must have seemed a breeze compared to his next project, putting up with the antics of Marlon Brando for the endless months making Mutiny On The Bounty.