TARANTULA  crawled across the screens of already Them!-bitten America in 1955, the second specimen of sci-fi’s immortal Bug Giant sub-genre. ‘Crawl’ may be inexact– something the size of a football stadium doesn’t crawl: it advances, remorselessly. 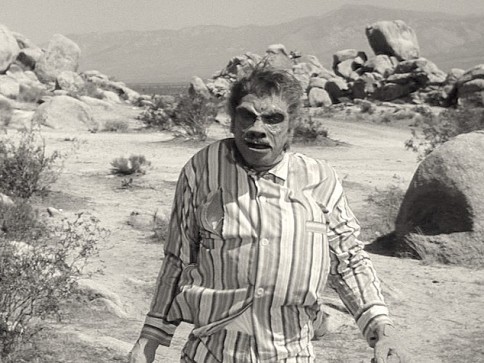 Most disturbing aspect are those pajamas

Lock-jawed John Agar, who bested the cold-served Revenge Of The Creature earlier in the year, is the local doctor in a tiny desert burg (complete with handy bio-lab ‘outside town’ to start all the ruckus). He’s dealt a mystery with a ‘unusual’ (of the sheriff-scratches-head type) discovery of a dead guy with acromegaly (repeat now and get used to it as it’s a word/condition you will become familiar with during the 80-minute story).  Not content with growing rabbits, mice and guinea pigs heftier than Great Danes, decent but foolish scientist Leo G. Carroll gets injected with his own serum/compound (“Isn’t that an isotope?” is uttered at one point, to clue the audience in and put mood-killing logic-skeptics to sulking) and his face basically melts into “acromegaly.” 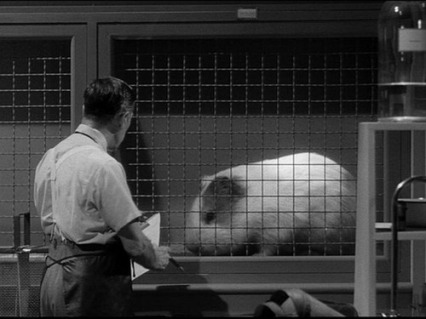 This is where Costco comes in handy

Agar is at first skeptical:” Listen, I’m just a country doctor, but I know what I know, and I know acromegalia doesn’t turn up in four days out of left field“, but he comes around when a spider the size of Fantasyland starts eating cattle, prospectors, patrolmen—working up the sparse Mojave food chain to what we hope will be a sock hop at the gym or a martini party at the country club. 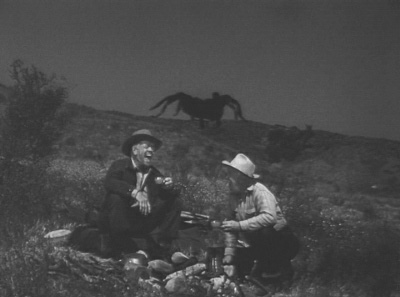 Agar gets to match flirts with the scientist’s sexy & stylish new assistant (not the standard  daughter or niece, for a change), played by Mara Corday.  Corday is covered up, complete with a silly hat out of Ladies Home Journal ,which is a shame, and a real fumble by the producers, since Mara was another atom-age bombshell: if you don’t believe me, beeline to Images). Sex must not have been on the doctors mind anyway, with defrosters like “Give women the vote and what do you get? Lady scientists.”  Oh, right, the spider..the spider..

That isn’t first base up ahead, Mr. Suave.

The second wave of boomer brats were too young to see this and its specie when they originally jammed drive-ins during the Ike Age, but we feverishly logged every monster movie we could stay up for when TV showed them during the early and mid 60s. Somehow, I missed this one. I knew of it, naturally, thanks to the  irreplaceable magazine source of wisdom “Famous Monsters Of Filmland”. Yet Agar’s enlarged arachnid escaped notching on my diligently typed lists (two-finger pecked on a ‘Royal’ that weighed almost as much as our finned ’57 Dodge Lancer) until a few days ago—and “at long last having no decency”, I see what I was missing.

Director Jack Arnold * keeps it briskly illogical, and there are a number of ‘here it comes!’ sequences that are amusing today and would obviously have been rousingly cool back when.  Using live-action footage of a real tarantula, enlarged and matted into background shots, mixed with putting the no-doubt confused critter onto miniature landscapes, guiding it around with jets of air, serves the peril purpose.  Obvious questions arise: how come it moves so slow?;  what collection of rocks or gullies does it handily hide in (this is the desert) without being spotted miles away? (Size Mattering Dept. not answering calls); before attempting to ingest Mara Corday why does it take precious time to demolish the Big Valley-sized house she’s in—is it angry as well as hungry?  Would I have considered any of this at age eight?

“But what if circumstances magnified one of them in size and strength, took it out of its primitive world and turned it loose in ours?”

It did well, taking in at least $1,100,000, and was soon followed by locusts, scorpions, a mantis, a large rubber chicken from outer space, crabs (save your off color remarks), shrews, a gila monster, Japanese imports and a 50-foot woman with gambling issues. Agar went on to at least nine more Cheese Classics, Corday decorated The Black Scorpion and The Giant Claw, and fans worth their salt know that the Air Force jet pilot who plasters the furry fiend at the finale would become one of the biggest stars of all time: can you think of a better guy to drop napalm on a felonious pest than Clint Eastwood?

* Jack Arnold warmed up with It Came From Outer Space, Creature From The Black Lagoon and Revenge Of The Creature, then followed with The Incredible Shrinking Man, The Space Children and Monster On The Campus.  He delivered the priceless High School Confidential, and the worthwhile No Name On The Bullet and The Mouse That Roared.  His movie career tanked thereafter with duds Bachelor In Paradise, The Lively Set and A Global Affair, but he kept busy on scads of TV shows. 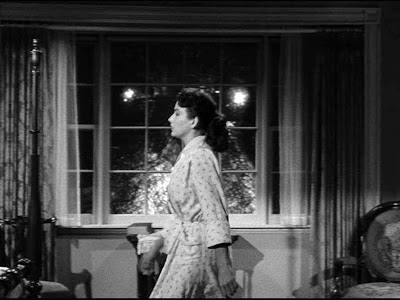 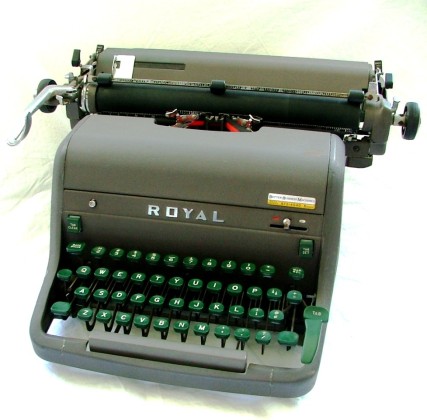