COLORS , from 1988, wasn’t the first movie to deal with the near-impossible job of policing Los Angeles mindlessly brutal criminal gangs. Segments of The New Centurions brushed at it sixteen years earlier, and TVs Hill Street Blues drew plasma off the sunny boulevards from 1981 to ’87, but director Dennis Hopper’s soundtrack-energized, profanity-steeped and decidedly bleak take hit the screens as gang violence had taken another serious uptick, fueled by crack and endless supplies of more and more firepower.

This happened to be set in L.A. (the story was originally located in Chicago) but it could have been any other US city; Hopper’s staging doesn’t have cameraman Haskell Wexler do much to accentuate the Californian ambiance other than get coverage at some familiar landmarks like the Watts Towers.

An unforgiving 120 minutes with only one likable character, it’s a mixed bag of furious action and some dramatic fireworks with choppy editing, clichéd setups and a poorly written romantic subplot that goes nowhere relevant and wastes both running time and the talents of a co-star. The moronic mindset of the ‘homeboyz’ comes across, but much of the cop-to-cop stuff feels inauthentic. Profanity sans profundity. Though there a number of good moments carried along by narrative momentum and acting chops, it feels disjointed: you can see the ending coming from Santa Barbara.

Robert Duvall is very good as the veteran cop (and nearly the lone decent person). As his surly partner, Sean Penn does his punk-with-attitude thing, but it doesn’t come off with as much conviction as his numerous other bad boys, as much from the writing as the acting. His scenes with Maria Conchita Alonso ring false (no love lost between them *). Once again, as happened too frequently when the Cuban/Venezuelan beauty was being showcased at the time, she’s misused by material and direction. 31 here, her considerable charisma and emotional energy is neglected. The movie seems more interested in getting her clothes off.

Best scene is a well-played fight in the cook station of a restaurant. Don Cheadle, 24, headlines the solid supporting cast, which includes Trinidad Silva (killed by a drunk driver at 38, three months after this came out), Randy Brooks, Glenn Plummer, Grand L. Bush, Damon Wayans (in an absurd scene involving a large stuffed rabbit), Gerardo Mejia, R.D. Call and—apparently as a favor to/from Hopper— Seymour Cassel, who has exactly one line. 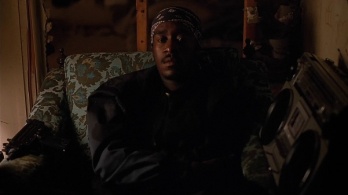 Done—at risk—on the mean streets, with gang members of assorted ‘colors’ alternating as guardians. Efficiently made for $6,000,000, it was well-reviewed and earned back $47,000,000, much of that from wanna-be jerkwads across the country who saw in the film a ‘lifestyle’ their peanut brains wished to emulate. This is One Guy Writing whose sympathy for gang-bangers ranks with that I hold for terrorists, child molesters and politicians. 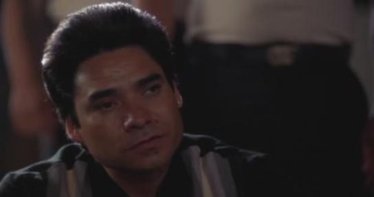 * Penn’s famous temper got him into trouble during filming when he had to spend 33 days in stir for punching an extra who took his picture. Down the line, right-leaning Maria and left-turned Sean had a notorious 2011 LAX airport exchange while claiming baggage. Always the gentleman, he called her “a pig” and she answered calling him”a Communist asshole”. So I guess a sequel is out of the question. 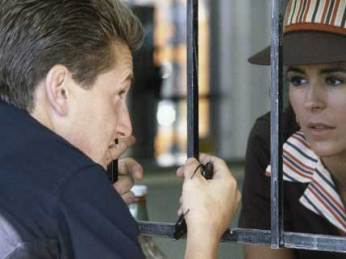