MERRILL’S MARAUDERS—-battle-packed 1962 tribute to a brigade of 3,000 jungle fighters who volunteered for a 1944 behind-enemy-lines mission in Japanese-conquered Burma. They ended up spending months struggling through fetid swamps and over back-breaking hills, covering hundreds of miles of hellish terrain, fighting the enemy time and again in forgotten places like Walawbum and Myitkyina. What bullets didn’t do, a host of diseases and every variety of tropical insect and crud did: less than 100 walked out still fit for duty.

Location filming in the Philippines, with a sizable second-unit (hundreds of Filipino soldiers and some American troops then based at Clark Field on Luzon) adds to the grit. Fuller did it all for an economical $1,000,000.  The whole cast is fine, unforced and naturalistic in their interplay.  In the lead, as Gen. Frank Merrill, Jeff Chandler delivers with his customary vigor. Some of his racked intensity wasn’t just characterization of Merrill, as he was in agony from an injury : your ears may note a few bits near the end have someone else post-dub some of his dialogue.*

Ty Hardin, Peter Brown and Claude Akins are solid in support. Color is vivid, sound effects crackling and intense action fills the scenario.  Fuller gives Akins has maybe the best single scene in his career: after a brutal battle, an old peasant woman offers him a handful of rice–all she can give from her own meager existence. His grizzled mug dissolving in tears of gratitude, exhaustion and shame could not have been done better by any major star you could name. In the aftermath of men’s mayhem, it’s a beautiful moment of grace and humanity.

Though shooting a movie in peacetime, even with a demanding maverick like Fuller (who would sometimes fire a pistol instead of simply calling “Action!”), was hardly close to fighting across WW2 Burma with malaria, the arduous Philippines locations, blazing temperatures and limited sanitation felled many with dysentery and the cast look suitably ragged and worn out.**  Jack Warner assured Fuller this would be a warm-up for the director’s desired project, The Big Red One, but that took another 19 years and a different studio to finally hit the beach. The opening minutes, a slapdash music score and the tacked-on ending were Warners’ editorial butt-ins on Fuller’s harsher tone. In a minor key, this tough little action fans favorite calls to mind Sam Peckinpah’s epic Major Dundee; excellence compromised by interference. Still, a good flick.

* Chandler had long suffered from a bad back. During filming, playing softball with Hutchins and some of the extras, a sudden reach for a ball wrenched his back severely enough that he eventually required surgery for spinal disc herniation. An artery cut during procedures began a nightmare round of 75 pints of blood transfusions. Infection resulted,  pneumonia arrived. He died in May 1961, eight months before this was released, the last of his 46 films. The death was ruled malpractice. Chandler was 42.

** The ‘China-Burma-India Theater’ of WW2 makes for fascinating study if you’re into history of the period. Other films set in the Burmese inferno include The Long The Short And The Tall, The Burmese Harp, The Purple Plain, The Wind Cannot Read, The Hasty Heart, Never So Few, Objective Burma! and Yesterday’s Enemy. 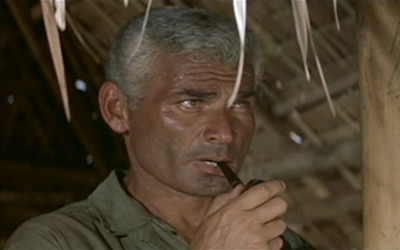