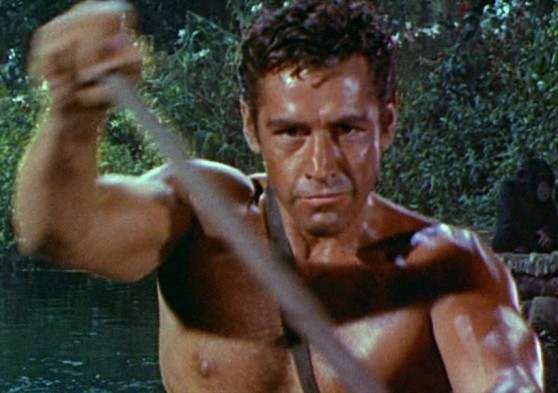 TARZAN’S GREATEST ADVENTURE—-the Ape Man tracks four men and a woman who’ve murdered for diamonds. Considering what sort of pretend-factor is required, this jungle adventure affair is a pretty good one.

Gordon Scott plays Tarzan for the fifth of his six turns at vine, and director John Guillermin makes the action scenes in this 1959 entry rough and tumble, more violent than the series had been since the early days of the Weissmuller reign. Tarzan is minus Jane this time, and Cheeta keeps a low profile. Scott’s jungle lord has a cultivated intelligence to go with his brawny physique.

The villains are all separate and distinct personalities for a change and they’re ably performed by good actors. Main interest among them is Sean Connery, 28, a few years before he received his government-approved license to kill.  Other dastardly diamond pinchers on view are Anthony Quayle, Niall MacGinnis, Al Mulock and Scilla Gabel (once a stand-in for Sophia Loren).  Helping Tarzan in his battle is Sara Shane.

Some location work for the 88-minute matinée was done in Kenya.  Critical reaction was approving and audiences shelled out $2,500,000 to bask in the thrills and color.