BULLETS OR BALLOTS teamed up established tough guy star Edward G. Robinson with Humphrey Bogart, who, after toiling for eight years in a dozen undistinguished parts had just broken through a level of prominence with The Petrified Forest. Their styles and professionalism meshed and this 1936 success, coming in #68 among the years output, was the first of five teamups.

“I don’t like the way your face is fastened on.”

Veteran New York City copper ‘Johnny Blake’ (Robinson), who has no problem batting hoods around in nightclubs and knocking them through windows, gets booted off the force during a cleanup campaign. It’s an undercover ruse to burrow into racketeer Barton MacLane’s all-powerful syndicate, with Bogart an impatient second-in-command, named ‘Bugs’.  Straight, no nonsense dame Joan Blondell (a savvy show biz baby from the get-go, as her cradle was a property trunk in her parents vaudeville act) sparks off the hoods ambitions with her own numbers-running biz. “Well, it’s time you got wise to yourself. Around this town the only reason friends pat you on the back is to find an easy place to break it.” *

Simplistic, snappy, entertaining Warner Brothers crime fodder, working the corruption angle to include ‘respectable’ bankers into the Depression Era woe-blame along with less-polite, order-following gangsters (notice the cops are clean). The ballots in the title point to the public that targeted voting is the alternative to spraying lead, but the script glosses crooked politicians and legal system malfeasance out of the scenario. Leave it to ‘Johnny’…  Pat, slick, silly and thanks to the assured work from the four leads, amusing for 82 minutes. Directed by William Keighley. 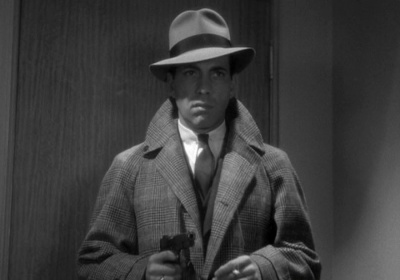