DJANGO UNCHAINED —– or ‘Quentin Unbound’, as the 2012 blockbuster saw writer-director Quentin Tarantino playing with his biggest ($100,000,000), most successful ($425,400,000) and most audacious train set yet (an American slavery western–or, more precisely, a ‘southern’).  Though he killed more people (well, Nazis) in Inglorious Basterds and just a mere 64 here, to date this is his bloodiest, most viciously violent audience shaker, and most profane, with 110 uses of the ‘n-word’.  Until the gab marathon The Hateful Eight clocked it by 22 minutes, it was also his longest, at two hours, forty-five minutes. 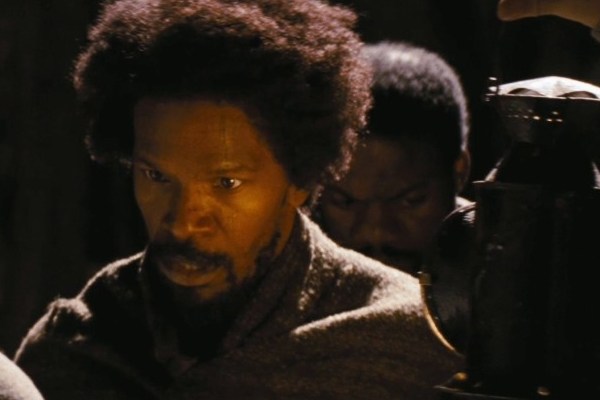 Length in itself is not a problem, but 165 minutes is a long time to be pummeled without letup, and the film would have been better served by knocking off a good twenty minutes–and twenty extra gallons of gore.  The excess—both Tarantino’s gift and curse—doesn’t wreck the movie, but since so much is so good it’s a bit of a shame that his inability to let well enough alone shaded Excellent from being Great.

Wait..the German is the good guy?  What’s this country coming to?

It is Excellent—in the casting, acting, direction, dialog, settings, camera work, sound, scoring.  It’s brutal, arresting, funny, literate, truthful, dense and thematically challenging. It’s absurd, inaccurate, indulgent, exploitative, repetitive, repellent and 21st-century smug. It shows an accomplished and passionate film-maker at the height of his technical mastery of the medium, with wit to spare and what may be layered insight into the dark part of the American soul.  It’s a pinata of voyeuristic pain that shows an adolescent at the wheel of a shiny vehicle, knocking over mail boxes with a shovel on the way to a party where everyone is too drunk to leave and too stupid to puke.  His best movie so far, even with the overlength in the last act, and the overkill: do people contain that much blood?

Now this is one total sonofabitch

The cinematography (Robert Richardson) is superb: the scene of the ‘regulators’ (ersatz Klansmen) riding across the hills at night is stunning.  Bullwhip’s never sounded so lethal.  The soundtrack picks fit the craziness.  The actors have a fiendish field day.  Jamie Foxx and Christoph Waltz carry the story admirably but buffs know any decent western’s only as good as its gutshot-deserving villains, and Tarantino delivers a wagon-load, headed by fabulously mean work from Leonardo DiCaprio’s happily obscene plantation owner and Samuel L. Jackson as his boiling demonic lick-spittle.  There’s enough casually assumed hate and propriety channeled through these two classic characters (and their marvelous interpreters) to choke the Mississippi.   Jams are pulled out, retrofitted and yanked anew, never mind anesthesia.  Candyland is no place for kids.

For inflicting wholesale mayhem with a warped sense of mischief, no less an expert than Josef Stalin observed (with we assume a shrug and grin) that “The death of one man is a tragedy, the death of millions is a statistic.”  A “change-the-channel-it’s Thanksgiving” subject like slavery, especially the blanket, ethnicity-based, society-blessed (religion sanctified, systemically profitable, etc.) type involving generations of people over hundreds of years is so vast, bizarre and wrong it defies understanding on a gut-level.  When approached through cinematic storytelling it tends to the sober, duty-bound ‘lessons’ of Roots, 12 Years A Slave and brethren: laudable, safe and for the most part dull.  Irony, being a smirking bastard/ giggling bitch, often allows elusive Truth revealed in a microscope rather than a telescope.

So it is, in the gaudy guise of a crimson-splashed spaghetti-western/blaxploitation/revenge/buddy movie homage, with background musical caress from Ennio Morricone, Jim Croce and Tupac Shakur, that the banal chatter of the oppressor class while toying with the living flesh of their ‘property’— interpreted through the VCR-educated sensibilities of a nerdy ex-video clerk— makes vivid the grotesque reality of the dogs, the lash, the brand, and the deeper warp of the soul.  This beats the wildly overrated (and to me, insulting) tripe of Inglorious Basterds into the ropes. 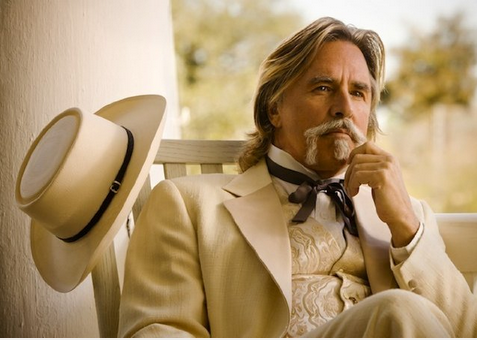 One thought on “Django Unchained”