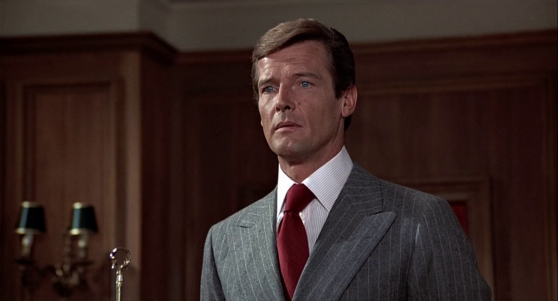 THE MAN WITH THE GOLDEN GUN,  released in 1974, was the 9th official Bond movie and the second for Roger Moore.  Though more enjoyable than the two preceding dishrags (Diamonds Are Forever and Live And Let Die), it’s still pretty lame.  The Moore pattern is set, as all is now played as a joke.  The fine-line balance of the early classics where you had enough believable roughhousing in the action scenes with quasi-realistic villains so that some tension was generated along with the droll tongue-in-cheek was replaced by cartoonish bouts with technically impressive but absurd stunts, cut-out bad guys and hopelessly smirking innuendo instead of wit. 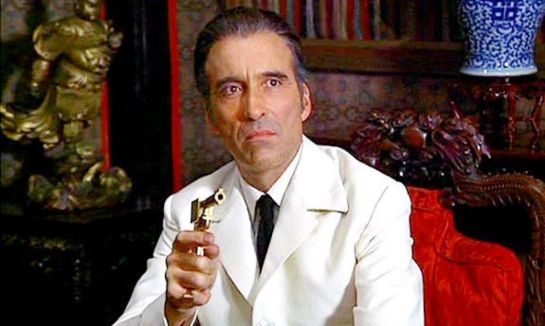 Moore looks TV-handsome, and at least puts some vigor into his fight scenes, but since he and anyone watching know that Sean Connery (or the discarded George Lazenby) could knock him off the set with one punch it undercuts the excitement factor and his arched-eyebrow delivery of the character’s sex appeal deflates that end.  All parry, little thrust.  His persona worked smoothly on television for the seven-year run of The Saint, but Bond requires a lethality that Moore can’t persuasively summon.  He looks great in the clothes, though.  Burned out screenwriters Richard Maibaum and Tom Mankiewicz don’t help him much with their anvil-heavy one liners.  As usual, they jettisoned almost all of Ian Fleming’s novel, the last of his thirteen 007 sagas, but what they came up with and the producers/director choices in handling show dimmed enthusiasm. 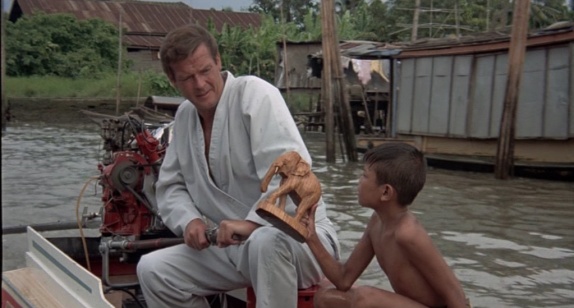 Talky and flyweight, it runs 125 minutes.  Bond’s after a ‘Solex Agitator’, some doodad that harnesses sun power (topical nod to the energy crisis) but must avoid being killed by rich, skilled assassin ‘Scaramanga’ (Christopher Lee), who likes to play with his victims in hide & seek scenarios and ventilate them with an engraved slug from the title pistol.  Director Guy Hamilton keeps it moving proficiently but it’s strained, and the silliness is amplified by adding some  teenage kung-fu girls as helpers and another atrocious hee-haw cameo from Clifton James as a redneck sheriff—a grating holdover from Live And Let Die: a major audience miscalculation. James is a fine actor, but he’s asked to mug like a circus elephant in the role. 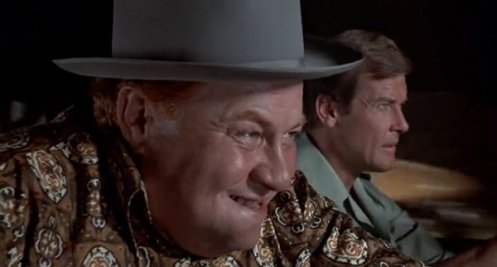 Car Ejector Seat 74, Where Are You?

Having suave and sinister Lee as a formidable villain would seem a lock, but the only thing interesting about the Scaramanga character here is his name.  Maud Adams is a Swedish iceberg as Lee’s plaything and Hervé Villechaize as ‘Nick Nack’ is literally a low point in the series mostly delightful array of evil assistants: thanks to this exposure in a major film, the world had to suffer through him for six years of Fantasy Island (where his outsized ego affronted female co-stars and exasperated producers). 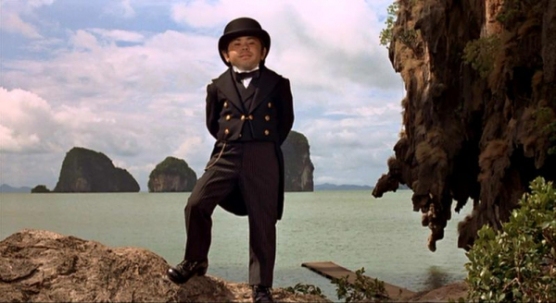 There’s never a typhoon when you need one

Britt Ekland looks great in a bikini, but her dolt character is one of the most thankless and certainly the most brainless of all the Bond-girls. A limited actress to begin with, aside from the ridiculous character, she’s handicapped here by slack direction and the flat sound looping in her awkward scenes with Moore put them both at a disadvantage. Now, back to that bikini…. 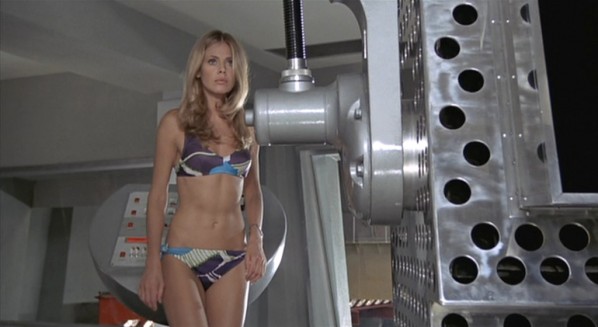 John Barry delivers another score, but he was not inspired, calling it “the one I hate most … it just never happened for me” , and the inane title tune bellowed by Lulu is a wanker. There is one great stunt with a car doing a remarkable 360 degree ‘aerial twist’ flying over a bridge, but it’s ruined by insertion of a stupid comic sound effect.

By far the best thing in this outing are the locations: Hong Kong (including the hulk of the capsized RMS Queen Elizabeth), Macau and Thailand. Some was shot in Bangkok, a section in canals at Thon Buri and most memorably, the climax in the dramatic limestone karst islands of Phang Nga Bay.* 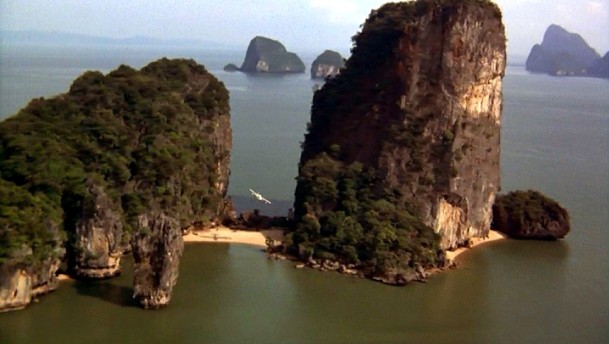 Also in the cast are veteran Richard Loo (yet another debit, as his marvelous voice is dubbed (!), in the last of 119 feature film appearances), Soon-Tek Oh, Bernard Lee, Marne Maitland, Marc Lawrence (out of place as a 30s Chicago-style hood), Desmond Llewelyn, Lois Maxwell and Carmen du Sautoy. 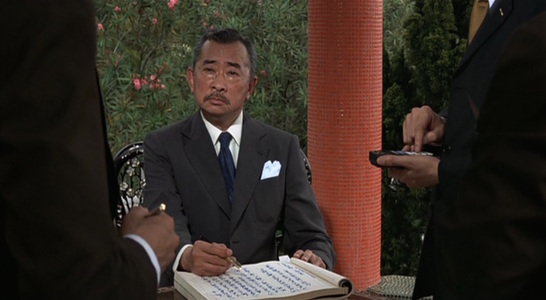 Produced for a relatively lean $7,000,000, receiving tepid to scathing reviews, it grossed $97,600,000.  James Bond would return as promised, in much better form and flair, with The Spy Who Loved Me, far and away the best of the Moore batch. 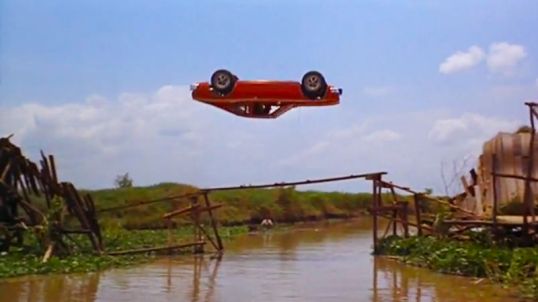 * The resultant tourist trade taking visitors to the Andaman Sea side of Thailand near Phuket and junketing out to ogle the ‘James Bond Islands’ of Ko Khao Phing Kan and Ko Tapu brought so much litter and environmental damage that boats are now restricted to visit. 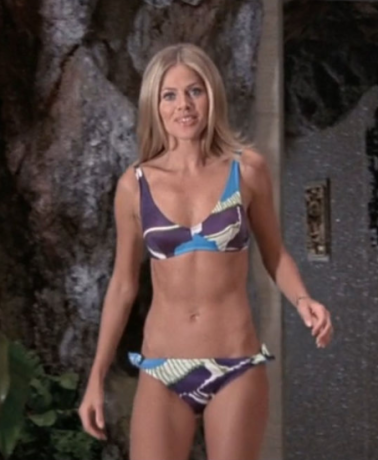 You didn’t think I’d post only one Britt bikini pic? You must be new to the site….

One thought on “The Man With The Golden Gun”