BATAAN, the 1943 movie, shows as little mercy as the 3-month 1942 battle in the Philippines that inspired it.  As an audience fever-pitch rouser, it served well in its time, but today it’s a dated, corny chore to get through: the obvious studio sets, artificial relationships and furious but absurd action scenes hard to swallow.

Directed by Tay Garnett, it runs on overmuch at 114 minutes, updating the old Lost Patrol & Last Stand schemata to fit the heroic, doomed US/Filipino retreat/defeat in the face of the invading Japanese.* 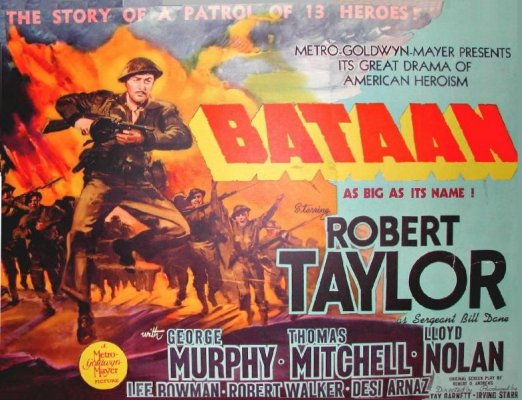 A motley group is left behind to blow up a bridge. They make up the template of assorted ethnic types for the scores of war and action-adventure films to follow.  As such, the movie is thematically noteworthy, being the first of its school: historian and cultural critic Richard Slotkin makes a strong case for its agitprop importance and significance as unifying groundbreaker in his essay “Unit Pride: Ethnic Platoons and the Myths of American Nationality.”

Laconic sergeant Robert Taylor and a dozen men face the foe, who are depicted as especially unsporting by using standard tactics like stealth, snipers and superior firepower (the nerve!). You could certainly make an overwhelming case for the Japanese military displaying utter ruthlessness and capacious cruelty, but having them clumsy and stupid goes a bridge too far.

Taylor (amid a mess of potted ferns and palm trees) has ‘Feingold’ (Thomas Mitchell, overweight and too old, sorry), a wiseass (Lloyd Nolan), a fresh boy-next-door (Robert Walker) who chews enough gum for a theater full of kids while frothing how much he wants to “get a Jap“, plucky Filipinos (Desi Arnaz, who loves bebop, and Roque Espirito, who wants to lop heads), ‘Matowski’ –lest we forget Poland (Barry Nelson), and laid-back, spiritual singing African-American ‘Wesley’ (Kenneth Spencer).**

The actors are fine; they’re sincerely doing their bit to win the no-holds-barred fight, and it’s conceded to be one of Taylor’s signature performances, with a famous blazing finale that left little doubt that We Are Pissed And You Asked For It.  The frantic over-the-top hand-to-hand action is pretty bloodthirsty for the time.

* The Monstrous Ego Known as General Douglas MacArthur had his boasts and pants caught down when the Japanese outfoxed him, just as they did with the likewise arrogant and dismissive British in Singapore. The smashed-up US Navy unable to relieve, MacArthur’s command fought valiantly, but after losing 10,000 dead they surrendered in the biggest capitulation in US history.  Ahead lay the Death March and years of horrendous treatment.

Before Bataan there was a low-budget job, Manila Calling (also with Lloyd Nolan); after, during the war, came So Proudly We Hail, Cry Havoc, Back to Bataan and They Were Expendable.  In later years: An American Guerrilla In The Philippines, The Longest Hundred Miles, Ambush Bay, MacArthur, The Great Raid and numerous low-budget junkers like Cry Of Battle, Battle At Bloody Beach, Escape To Mindanao, and Once Before I Die (last for a reason).

**The NAACP gave MGM two awards for their thoughtful presentation of the Wesley Epps character. However commendable for giving character Epps and actor Spencer an equal share in Democracy (there were no integrated units yet) the movie nonetheless ran into old-fashioned home-made bigotry  when it was kept out of bookings in the South due to the presence of a black man not shuffling subserviently. ‘Why We Fight?’…..