THE BATTLE OF NERETVA , a mutilated 1969 giant of a WW2 movie from Yugoslavia, requires something like a scorecard, considering the complicated event it describes and the various versions released internationally at the time and that are available for home viewing today. The 102-minute version I saw (the one that landed in the US in 1971 and is the most easily accessed of those on video) is a majestic mess, an eye-filling spectacle to look at, a jumbled, edited-with-an-axe effort to listen to and make sense of.

The original version ran 175 minutes, assorted Euro cuts 145, so you can assume that an hour of missing material would flesh out the multiple characters and subplots. Dubbing remains a problem, in whichever version, goosing an international cast. Bernard Herrmann contributes a surging soundtrack for the English language edition; there is a different score for the longer cut, that orchestral framework coming from Vladimir Kraus-Rajteric.

The director was Veljko Bulajic, who co-wrote the unwieldy script with his brother Stevan. It was the biggest, most expensive movie made in Eastern Europe (outside the USSR) at the time, costing something like $12,000,000. It’s a National Epic (for what was then the patchwork construct of Yugoslavia: since re-splintered into a half-dozen countries) of a paradoxically victorious defeat, filmed on locations in Bosnia and Herzegovina, employing scads of tanks and planes, herds of horses and 10,000 extras.  Pitching in are Yul Brynner, Curt Jurgens, Hardy Kruger, Franco Nero, Sergei Bondarchuk, Orson Welles and Sylva Koscina.  Bondarchuk also lent his unsurpassed marshaling talents in assisting with the production, coming off his directing triumph of the gigantic War And Peace. 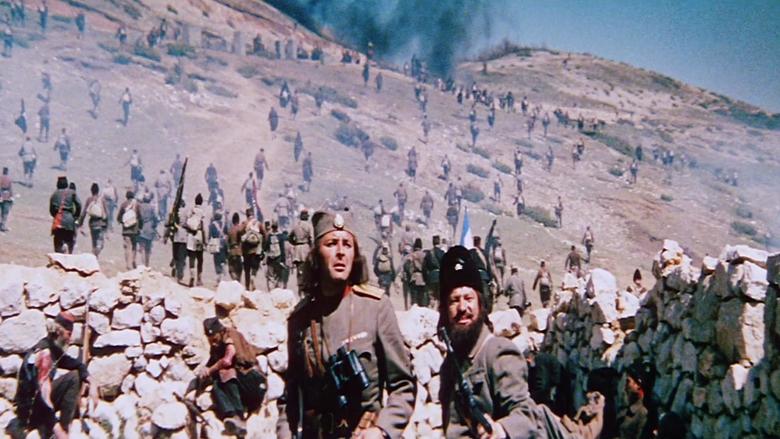 The whole swarming mass of men, women, Tiger tanks and cavalry, constructed & demolished villages and bridges, animals, equipment and enough explosions to start an earthquake were amassed to recreate a desperate months-long 1943 collision of five armies. The dead and their bereaved loved ones might take scant comfort* , but the World can thank Hitler for some of his colossal strategic blunders, willful gambles that spread his nigh-invincible war machine too thin. 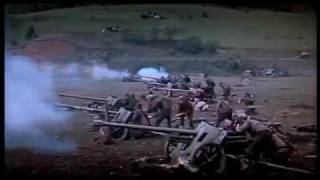 One of those was his 1941 invasion of the Balkans, the occupation of which tied down a huge number of troops (100,000 never coming back). Resistance from Yugoslav partisans was so fierce that by ’43 the Nazis decided crush them once and for all. German and Italian armies, with help from Croatian ‘Ustasha’ and Serbian ‘Chetniks’ attacked the bare-bones Communist partisans led by Josef Broz Tito (still ruling Yugoslavia when this movie was made).  The partisans retreat, fighting, to the Neretva River, hoping to get across before the Nazis and collaborators annihilate them.

There is enough action in this epic for five pictures, much on a grand scale, and the detailed direction is quite impressive. Fine cinematography is by Tomislav Pinter, including some pretty arduous work done during snowy winter conditions. Sound effects are excellent. Pablo Picasso did some of the art work for the posters; his payment was a case of Yugoslavian wine. The uncut version was Oscar nominated as Best Foreign Film (the winner for 1969 was the classic political thriller Z ). In the US it only made $1,700,000, coming in 95th place for the year. 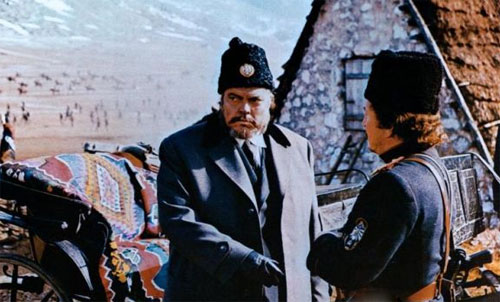 General audiences will be confused and bored, as the short-version editing makes an already personality-packed and motive-muddled story nearly incomprehensible. The actors are giving it their best, but the characterizations are left wanting in the gale of fireballs and gunsmoke. Fanciers of mighty historical sagas will appreciate the scale and lament the cutting. Girlfriends and wives will leave the room after about ten minutes.

* Over a million Yugoslavs died, one in nine of the population.