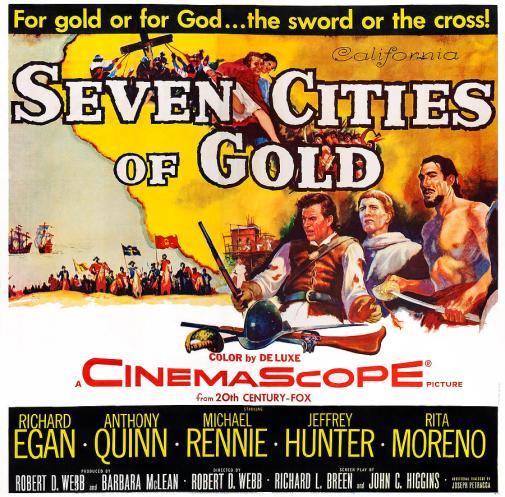 SEVEN CITIES OF GOLD—-though primarily a lauded second-unit and assistant director, Robert D. Webb had just scored a boxoffice hit helming Beneath The 12-Mile Reef, and in 1955 was given the reins on two expansively produced outdoor historicals, the okay western White Feather, and this, the much better of the two, a handsome saga about the 1769 Spanish expedition into California.  Erstwhile searching for the fabled treasure cities of the title and mapping ports (the rapacious Iberians not content with the booty hacked away from the Aztecs and Incas and keen to beat other Europeans to the punch planting flags), the gutsy foray has to contend not just with desert, starvation and strange new tribes but with a fearless and humane priest, Father Junipero Serra. He takes them to task for civility while intent on founding missions in the vast unknown wonderland on the Pacific.

Fox allocated a plush $1,500,000 to outfit all the extras and showcase the wide-screen locations in Mexico, near Guadalajara and Manzanillo.  Webb luckily was graced with Lucien Ballard on camera and Hugo Friedhofer to provide a stirring music score.

Richard Egan has the showiest role as the cocky second-in-command, while Anthony Quinn makes a quietly confident leader, commanding with calm assurance instead of bluster.  Michael Rennie conveys the piety and decency of Serra with his typical sincerity–that marvelous voice of his is always welcome–it’s one of his best roles.  Jeffrey Hunter gets saddled with the hardest job, playing an Indian leader under regalia and adornment, and some of the less-effective bits of the dialogue. Reviewers slight him here, but I think he’s acceptable. Charming, pretty, and friskily suggesting a blend of innocence and naughtiness, 24-year old Rita Moreno takes on the requisite ‘native maiden’ part.

Good sound, decent action scenes, some neat bits of drama, honor and tragedy. The religious angle is present (including one surprising cameo of allegory and miracle) but it doesn’t crucifix-clobber you into derision.  With Eduardo Noriega and John Doucette, running 103 minutes, it made $2,600,000, so with the price tag came in at a loss, and the film has faded from memory.  It deserves better. Friedhofer’s score alone would be enough, but it’s clear everyone put some effort into this. Works for me. 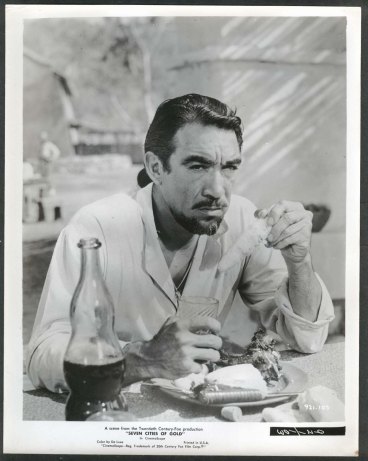 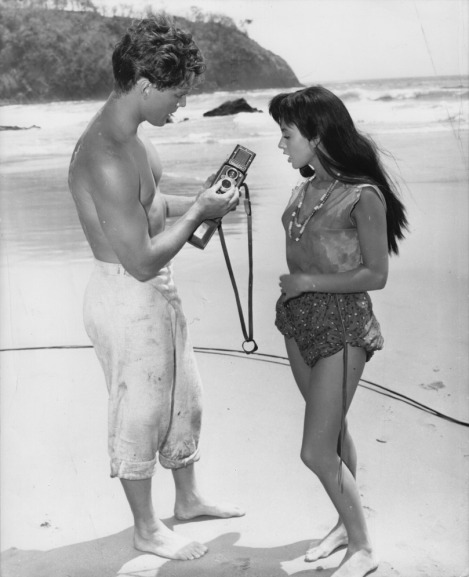 A little flirting between shots?