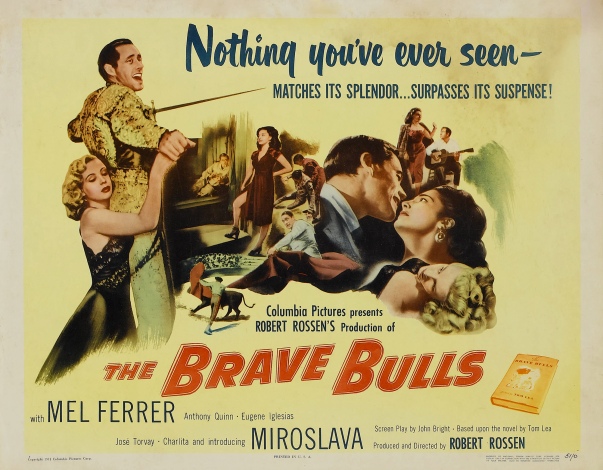 THE BRAVE BULLS was decently reviewed upon its release in 1951 and made a passable $2,200,000, yet it’s all but forgotten today, despite a quite interesting pedigree.  Apart from being a well-done drama, the confluent elements of that pedigree are alone enough to warrant a view.*

Renowned painter Tom Lea’s first novel was adapted by screenwriter John Bright and then-hot and controversial director Robert Rossen.  The story turns on the personal crises of star bullfighter ‘Luis Bello’ (Mel Ferrer),a matador at the height of his fame who is plagued by crippling fear after injury in the ring.  He’s also fallen for his managers girlfriend, and supports a family retinue of hangers-on and an idolizing younger brother who desires to share the glory.  The limits of physical courage, the demands of conflicted ego and the specter of tragedy define the story arc, half spectacle per the flamboyance of the settings and profession, half intensely intimate suiting the pride and anguish of the characters. The bloodlust and fickle emotions of the crowd, the strain of loyalty with family and friends, the cold practicalities of business and code of professionalism coil around the grace and trap of Honor. One pair of shoulders can only bear so much weight. It’s a smart script. 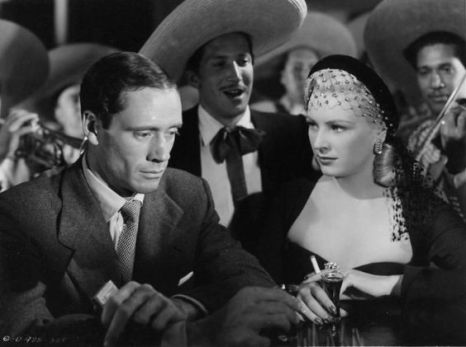 Wanting a documentary-style look, Rossen gave Floyd Crosby, an expert in that realm, his first mainstream feature assignment, covering the crowd and actual bullfighting, then James Wong Howe took over for the more intimate scenes. With the exception of 33-year old newcomer Ferrer, Czech emigre Miroslava and veteran Anthony Quinn the rest of the cast are native Mexican (speaking English, all filming done in Mexico).  Music score from the prolific but unsung Mario Castelnuovo-Tedesco provides the traditionally rousing backup.

Quoted as saying “I curl up inside and freeze when I have to act”, generally a stiff and humorless presence in his roles, Ferrer displays more vigor here than I can recall from any of his later work. Quinn, who had been off-screen and on stage and TV for four years, dealing with Blacklisting’s less-recognized half-brother,’Graylisting’, is customarily excellent. 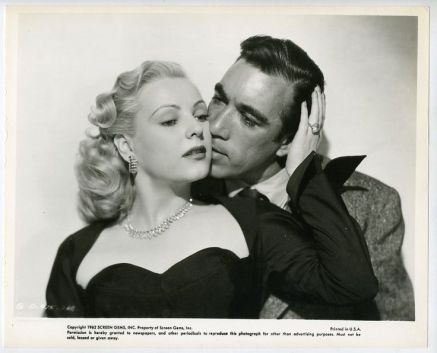 * A half-dozen threads of Art, Politics and Timing cross-link in this films DNA.  Lauded for his western murals, Tom Lea remains most famous for his startling WW2 battle art that appeared in LIFE Magazine, including the famous “That 2000-Yard Stare” and “The Price”. His first book, that became this movie, is considered a classic.

Scenarist John Bright had movie classics under his own belt with The Public Enemy (the ‘grapefruit scene’ was his idea) and She Done Him Wrong, but the Blacklist was onto him by the time this came out (he was a Communist).  As a young journalist in Chicago, he’d been present at the infamous dinner where Al Capone beat two fellow gangsters to death with a baseball bat.

Director Rossen had just copped Oscar noms for writing and directing 1949s Best Picture winner All The King’s Men.  He also was caught up in the HUAC investigations—this picture had delayed release due in part to those hassles.

Quinn, at 36, with 51 parts logged, had yet to break stride as a lead and drew this job because the ascendant Marlon Brando turned it down, telling Rossen “Offer the role to Anthony Quinn. He wants to be me, anyway.” (be a dick, while you’re at it).  A year later, Quinn won his first Oscar, supporting Brando, in Viva Zapata! (Mexican rebels to the rescue). 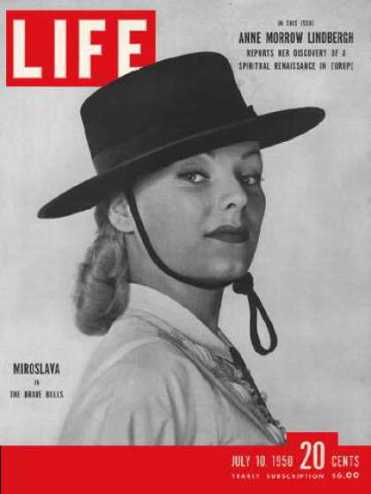 Ill-fated 25-year old Miroslava had fled with her family from Nazi-occupied Czechoslovakia and naturalized into a Mexican citizen. Her brief film career ended with her 1955 suicide after a passionate affair with bullfighting legend Luis Miguel Dominguin.

Cinematographer Floyd Crosby followed this with acclaimed work in High Noon and dozens of lesser films (he also produced a son named David who went his own unusual route to artistic glory).

All these folks meshed in The Brave Bulls just as there was a postwar wave of fascination with the grandiose and bloody sport (tradition?barbarism? call it what you will), influenced by writers like Hemingway and Robert Ruark.  Toreadors and capes decked cinemas with The Bullfighter And The Lady (best of the batch), The Brave One, Pandora And The Flying Dutchman, and The Magnificent Matador as well as passages in The Sun Also Rises and Around The World In 80 Days. 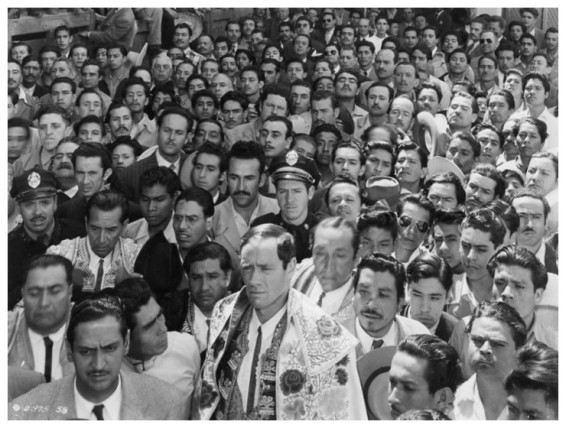