ALFRED THE GREAT  carved his name in Britain’s history in the A.D. 870s, several hundred years before the word ‘overwrought’ entered the lexicon.  It certainly fits him better, as spouted in the royal flush manner by David Hemmings throughout this 1969 howler. Critically drawn & quartered, bled to death at the box office, it a thrust a spear into the 28-year old actors blossoming leading man career and joined a lineup of expensive high-profile flops about English history.* 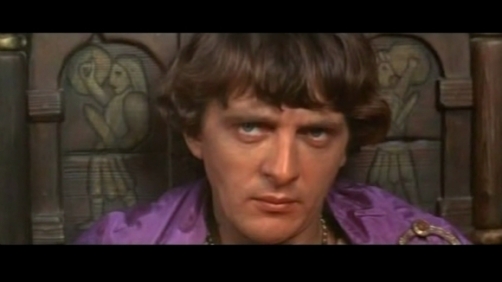 Raggedly directed by Clive Donner, the script by James R. Webb and Ken Taylor can’t figure out how to make narrative sense of Alfred’s battles with the invading Danes (led by Michael York, practically shattering his molars with fervent declarations of olde Scandinavian bloodlust), his constant wearisome squabbles with underlings (everyone hamming like it was 999) and his awful treatment of his wife (pretty Prunella Ransome, looking more Swinging London than 9th Century Wessex).  The speeches are atrocious.

Crowds, plenty of noise, some okay costuming (with errors), a faux-rousing score that adds nothing but more volume to the shouting and clanging, the attention-jolting camera work that screams “1969!”, and gallons of blood.  Before Braveheart and its brilliantly realized chop & hack Iron Age battle scenes, came these elaborate but disjointed stumblefests, employing 1,500 Guinness & doobie-primed extras. A mob of them were students, hippies and local rowdies, while 450 were Irish soldiers—the two groups didn’t take to each other so there were lots of injuries during the scrapping.  The sets are well done, not over-ornate, the rustic appointments a decent suggestion of the times.

You there! Drop that bloody pint!

As written, Hemmings character is all over the emotional map, and so thoroughly unpleasant it’s a wonder anyone would follow him for any reason other than to kick his snotty bum.  I think if I saw him and a big Viking swinging swords at each other, I’d put quid on Copenhagen.  The normally fine actor is lost in a bog of confusing characteristics, bad editing, directorial clunkiness, fake passion.  Performing since childhood (he was a boy soprano), Hemmings had been in films since 1954, exploding into stardom twelve years later with Blow-Up.  He drew the best notices in the otherwise panned Camelot, then headlined the remake of The Charge Of The Light Brigade and Barbarella.  All three under-performed (no fault of his), then this one dropped like an anvil in a moat. Shot in 70mm, it cost $6,000,000: the American take was a peasant’s $198,000, and it did little better elsewhere. 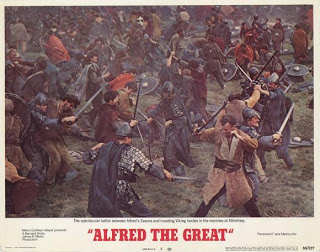 *Within 1968-1972 costly disasters about famous Britons and their deeds included The Charge Of The Light Brigade, Oh What A Lovely War, Young Winston, Cromwell, Waterloo, and Battle Of Britain.   Alfred the Great ended the producing career of Bernard Smith, who’d had a hit with Elmer Gantry, then a blockbuster with How The West Was Won.  He followed with three big defeats: Cheyenne Autumn, Seven Women and this coup de grace with Alfred. Speaking of odd history tweaks, Smith’s biggest success was the ultimate western epic about Manifest Destiny, while he himself was a lifelong Marxist.  Maybe Alfred the Great appealed to Smith because the old Saxon wardog-priest had headaches of allegiance?  Or maybe Bernie just cast the runes when he smelled revolution in the air, with its flood of youth-market money, and the non-dialectic part of him wanted to redistribute some of it?