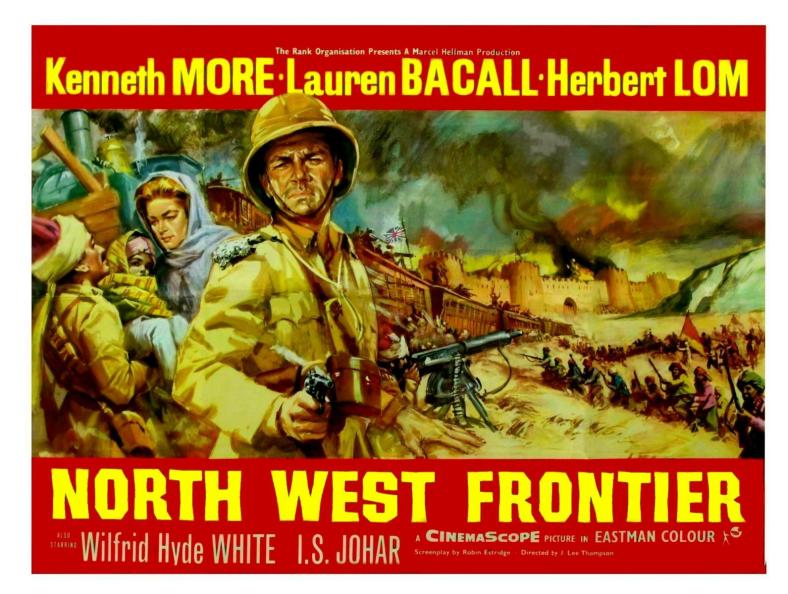 FLAME OVER INDIA , an excellent 1959 adventure from England, was titled North West Frontier in Britain, as their audiences would recognize the locale as that fabled mountainous section of Victorian Empire where so many red or khaki coats had fallen in service of the Raj.  American moviegoers may have confused it for a western, so India in the title cleared the hurdle of our popcorn-munchers legendary geography laziness.

Directed apace by J. Lee Thompson, produced for an economical $654,000 but with enough scale on Spanish locations near Granada to convincingly suggest the sweeping distances of upper NW India (now part of Pakistan: some scenes were done in India, in Jaipur,in the State of Rajasthan: crowds of extras at bargain basement).

1905: a British officer (Kenneth More) is tasked with escorting a Hindu boy prince away from a Muslim uprising. The resultant train ride/escape is peopled with the lads widowed American governess (Lauren Bacall), a cheerfully chatty Brit ex-pat (Wilfrid Hyde-White) and a few others, including a shortly-to-be-devious half-caste journalist (Herbert Lom).

Tribesmen attacking from the hills, massacre, blown tracks, a wrecked bridge to cross, budding feelings between the attractive leads, and no love lost with the sour suspect scribe. Colorful, fast-moving, exciting, and witty, with a most likable cast.

The script from Robin Estridge and Frank S. Nugent strikes a nice balance between character viewpoints, giving everyone involved a believable pro/con argument for/against the political status quo.  It was still too early in the memory-infused blame game that marks historical amnesia to play cheeky-nostalgia with the bygone Jewel-In-the-Crown (like the later The Man Who Would Be King) but post-WW2 redrawn reality had dawned enough not to expect a march in “dratted natives!” lockstep with the swagger of Gunga Din.

In the framework, the earnest and affable More makes a hardy, duty-bound yet sympathetic officer with plenty of manly pluck behind second-nature good manners; a strong, capable and attractive Bacall is coolly his equal and sparring partner with a more liberal bent; Hyde-White gets to have fun being a jolly egg.  Lom, deep in his career’s villain-phase, has a field day: sarcastic, injustice-stoked, simmering with fury, ultimately dead-on vicious. Nerve-wracker of a scene has him playing with the child prince near a whirling piece of machinery, daring the boy to get closer…closer…

While this didn’t strike gold in US theaters, a take of $1,100,000 putting 121st for the year, it was a big hit in Britain and Europe; after seeing director Thompson’s handling of this actioner, bolstering his previous lauded work on Ice Cold In Alex and Tiger Bay, Gregory Peck made the sale-closing pitch to have Thompson take over the aim of The Guns Of Navarone. 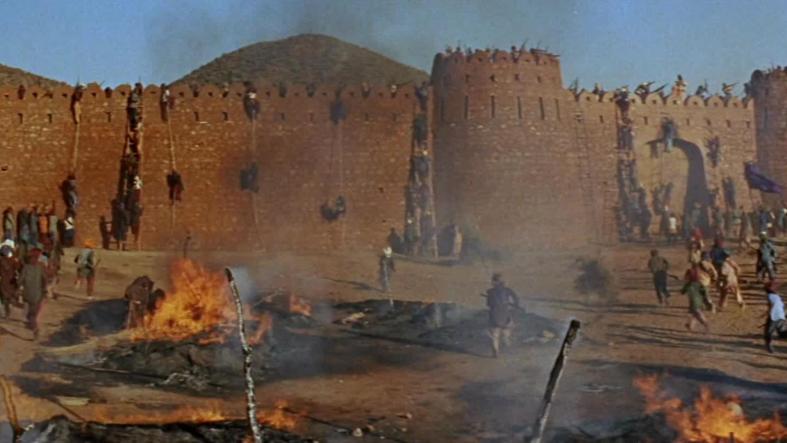 *Hugely popular (and often controversial) in India, where he acted in 100 movies, directed a dozen, and married five times, Johar is best recalled internationally as ‘Gasim’, the hapless fellow Peter O’Toole rescues from the desert in Lawrence of Arabia . Alas, he didn’t make it to Aqaba–because “nothing is written”.