A DANGEROUS METHOD —-“It seems to me the measure of the true perversity of the human race, that one of its very few reliably pleasurable activities should be the subject of so much hysteria and repression.”  Some creative elixir in the collaboration of quease-teasing director David Cronenberg with the quiet intensity of actor Viggo Mortensen has produced the director’s three most audience-accessible films–and the best (the others are A History Of Violence and Eastern Promises).

Cronenberg’s career-long inquiry into his characters psychological and spiritual torments previously manifested in yucky physical eruptions via special effects, but the Viggo Trio (as it shall heretofore be christened) leaves his thematically speculative, visually daring, compulsive (and repulsive) science-fiction (Scanners, The Fly, ) to the art-house wing of his pantheon. The Viggo Trio still wrestle with existential agony but they ground themselves in real people and plausible situations.*

This 2011 winner is the most thoughtful and dialogue-heavy examination of anguish of the three (no bloody action here like the first two); this time Mortensen shares the brain-soul idea battle with Michael Fassbender and Keira Knightley, playing the real-life fathers and mistress of Psychiatry–respectively, Sigmund Freud, Carl Jung and Sabrina Speilrein.

Zurich, shortly before WW1:  a young female patient with a severe hysteric disorder comes under the word association/dream interpretation treatment approach of  Jung, and draws in the advice and argument of Freud (Mortensen).  The flamboyant (to put it mildly) misery and sensual allure of the woman contrasts with the growing friendship and studied theorem dueling of the doctors, and it makes for a riveting 99 minutes as, for better or worse, Psychoanalysis is born.  For the doctors and patient, gain requires loss.

Sounds dry?  Not with a superior time-for-grownups script from Christopher Hampton, Cronenberg’s measured and careful direction, effective period recreation and excellent acting as the players bring dramatic life to their controversial intellectual legends. Fassbender and Mortensen get the choicest lines, while Knightley steps out with a wild, stops-pulled submersion into snapped synapses that is so physical and challenging it elicited divided responses from viewers: it’s either fearless and stunning or outrageous scenery-gulping camp.  I take the former view–and think she’s a revelation, but I can see why some would claim the latter as Keira practically eats her way out of the screen like some kind of demonic dog.** 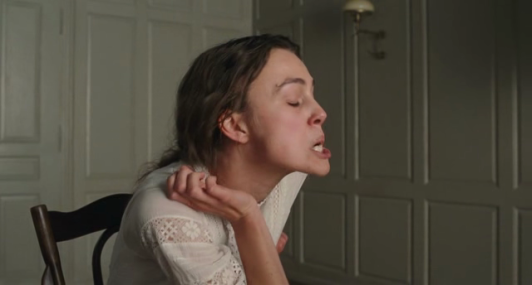 Costing $18,000,000, drawing much praise and logging a return of $27,500,000, with Vincent Cassel, Sarah Godon, Andre Hennicke and Arndt Schwering-Sohnrey. Shot in Austria and Germany. Fine music backing by Howard Shore, one of fourteen soundtracks he has done for the director. 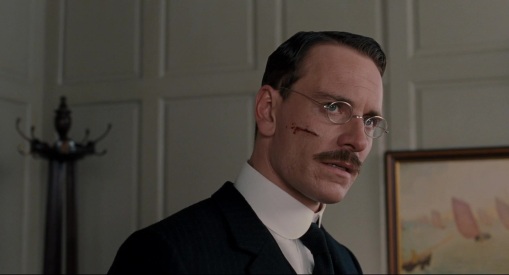 * Granted, ‘plausible situations’ may be expanded here to accommodate the occasional naked knifefight-to-the-finish in a steam room against two thugs in black leather jackets….

** She’s one of that group of modern actresses who seem to unduly divide audiences, especially women, into either fans or kneejerk, often absurdly rabid detractors. Lumped in by dint of carriage, age, frame and manner with Natalie Portman, the two are joined by the likes of Anne Hathaway, Gwyneth Paltrow and Angelina Jolie in silly spite from the berate bleacher. Jealousy out there–ya think?  The juvenile hiss-fest gets old.  Is there a Giant High School out there, hovering over all?  They look great. The acting is superb. They’re successful. You don’t know them.  For cryin’ out loud, keyboard-witches, dare your inner rejected sophomore, get a semblance of your own life. Or just stick to reruns of Glee.