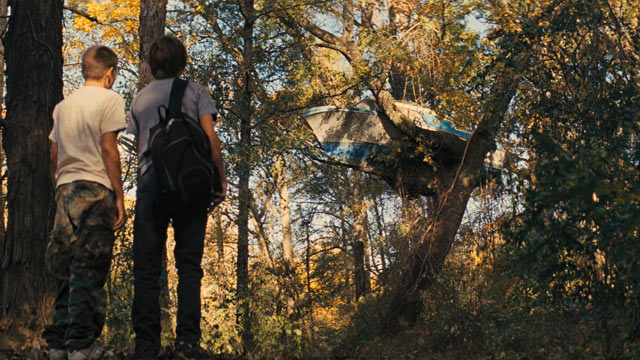 MUD—–Southern Gothic, in film, is a hard genre to pull off without going overboard into camp or sinking into a swamp of dreariness. That this fine 2013 drama succeeds in doing the mood justice would be recommendation enough, but that hot’n lazy realm is just one part of the whole in writer-director Jeff Nichols’ critically praised story.  It’s a deeply felt coming-of-age piece, a nervy adventure, an effective thriller, and has a strong framework of Twain-esque Americana enfolding the mix of themes. 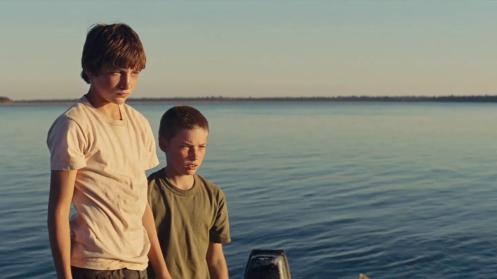 ‘Mud’ (Matthew McConaughey) is a recluse on the run, living in a boat stuck in a tree on the Arkansas River. Teenage buddies ‘Ellis’ and ‘Neckbone’ (Tye Sheridan and Jacob Lofland) befriend the odd duck, and his story (as well as the law, his girlfriend’s family is after him for revenge) entwines with Ellis’ family troubles: right, wrong, young love, fraying family bonds, shotguns and a pit full of water moccasins! 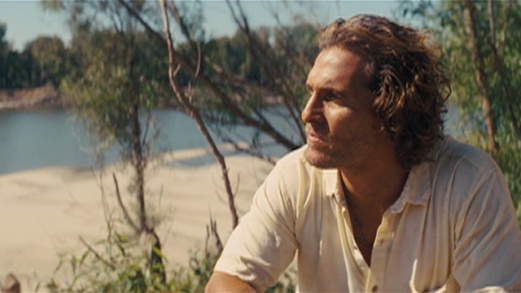 It all works, thanks to Nichols script and sure-footed direction.  Atmosphere is cinched with location filming in a half-dozen small towns in southeast Arkansas ensuring a rich regional cutaway view of the novel-like characters in their particular world, frank and guarded, easy and tasking.  McConaughey scores again (man on a roll), that honeyed drawl masking some profound sense of loss.  It doesn’t hurt to be flanked by the convincing home-grown likes of Reese Witherspoon, Sam Shepard, Michael Shannon and Joe Don Baker.  As the boys, newcomers Sheridan and Lofland are naturals, in look, bearing and sincerity.  Like actual real kids without sappy showbiz artifice.

Wistful and wry, painful and hopeful, tough and fanciful, it draws you into a leisurely-paced 130-minute flow like the warmly seductive, dangerous river it’s set on, with some discoveries, perils and delights on the way to the promise of peace and salvation in the distant but just maybe reachable Gulf of Mexico.