ONCE BEFORE I DIE  is, if you are twisted enough to enjoy a really bad movie, one you should see ‘Once Before You Die’.  Why this 1966 nonentity?  Because—directed by John Derek (clue #1), starring his wife at the time Ursula Andress, shot over in the Philippines (Derek producing) on a budget of what looks like fifteen dollars—this is the Plan 9 From Outer Space of War Movies.  Minute 1 to minute 97, priceless in its staggering ineptitude, enough bring on hallucinations or possibly even turn back Time.

A critic I admire*, Danny Peary, gives a positive nod to this in his delightful book “Guide For The Film Fanatic”. So prompted, I got around to looking up info on the Internet. Reading fan write-in’s about this on “Internet Movie Database” had me in stitches, so I summoned time and nerve enough to unearth this  treasure.  An hour & a half later I felt ten years younger, such is the raw power and clear vision of Derek’s contribution to the WW2 pantheon.

American cavalry officers, playing polo in the Luzon mountain city of Baguio (lived there! it’s beautiful) on Dec.8th, 1941, have their game rudely interrupted by strafing Japanese planes.  Figuring something is up (?) Capt. Derek leads his squadron and girlfriend (Andress, looking in hairstyle and form-clinging clothes about as 1941-ish as Miley Cyrus) back to Manila to join the fight.  On the way, Ursula has a “do it once with her before you’re dead” effect on the men  (reasonable given how gorgeous the 30-year-old Swiss bombshell was).  Assorted skirmishes, arguments, speeches and stream-bathing occur before the final audience-wringing Statement Against War (done with the subtlety of dropping Mt.Everest onto Kansas). 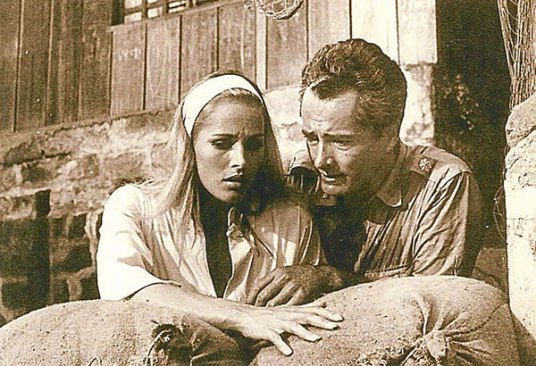 Andress was never any threat to Ingrid Bergman when it came to emoting, but after this–and the immortal badness of She, it’s amazing she ever was considered for anything beyond nudity (which this movie doesn’t provide–yet another cheat!).  Of course she’s unforgettable, physically, from Dr.No and I’ll grant her being not bad in The Blue Max, but her frozen blank stares here in Derek’s lingering close-ups are almost petrifying. 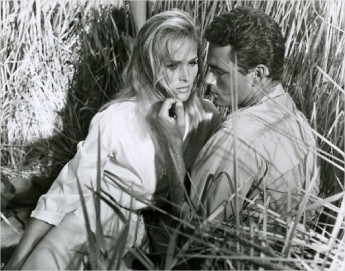 Derek, until he gets killed a third of the way through, in a ludicrous scene –no spoiler because this movie resists spoilage–is also dreadful, and about-to-be-TV-Tarzan (six degrees of Bo) Ron Ely looks so ill-at-ease you assume he got sick during the shoot (probably looking at the script).  Small roles are likewise groaners, including ex-Tarzan Jock Mahoney and the movies writer, Vance Skarstedt–for some reason showing his face, as if his words were not glory enough.  In the opening credits, Derek grandly lists eighteen of the Filipino bit-players, who have few or no lines to speak: this could have been a polite nod to the host country, but it seems more like Ego On High, as if Derek was trying to invite comparison of this turnip to Gone With The Wind–“just look at all these names!”

The sole credit for anything that approaches professionalism is to co-star Richard Jaeckel, playing a psychotic-from-Mars “Lt. Custer” (ah, the irony echoing across history). The rugged-yet-boyish, always dependable Jaeckel seems to realize he’s signed onto a Giant Piece Of Poop and plays it big, doing what he can with the wretched dialogue and direction.  He also has a quick fanny-shot: holy balut!, was Dick Jaeckel the first American movie actor to show his puwit on-screen?  This kind of stuff can keep you up at night.

Derek & Andress (1957-66) divorced shortly after this came out: she dumped him for Jean-Paul Belmondo, he went on to Linda Evans.  The record must note that Derek’s first movie as a director (this the 2nd) also starred Andress and featured Jaeckel–as well as Aldo Ray, Sammy Davis Jr., Robert Duvall and Keenan Wynn.  It is Nightmare In The Sun, and could serve as a sort of missing movie link.

To further set things straight, we note that Once Before I Die, thrust upon America in ’66, was released a year earlier in the Philippines, under the title The 26th Cavalry.  That real outfit performed heroically during the defense of Bataan, and on Jan.16, 1942 conducted the last cavalry charge in US military history. Derek himself served in the Philippines in 1945, during the liberation.

Before we bump the asterisk below (promised way up near the top of this blather) I just have to credit snippets of some of those comments I saw on the Internet Movie Database: “…deserved to be left in the jungles of the Philippines from whence it came”….”wouldn’t have been able to pull this thing up with a crane”….”wishing that the Japanese would come in, whack everybody and put the cast–and the audience–out of their misery”….”almost defies belief”…” badness is permanently ingrained in my memory”…………amen

Is this a sexy look or did one of the extras just convince her to try a ‘balut’?

* You like dark blue, I favor turquoise.  I have movie favorites that affect me deeply, and it always rankles me to see them ridiculed.  There are others, considered masterpieces, that I wouldn’t give you a nickel for.  Danny Peary’s polite applause for this flick shows that even the best & brightest can sometimes come up a-puzzle.  Find any reviewer, go through their opinions, and even if you feel they’re right 90% of the time, sooner or later you’ll bonk head-on into “What in the hell?” territory: my long-winded mouthing-off no exception.  To moi, aside from camp value, this earnest and sincere vanity curio is about as smelly as they get, but if you like it, and it strikes some chord and gives you insight or pleasure, then hey, you’re one-up on happiness in a troubled time, and that’s not to be despised.