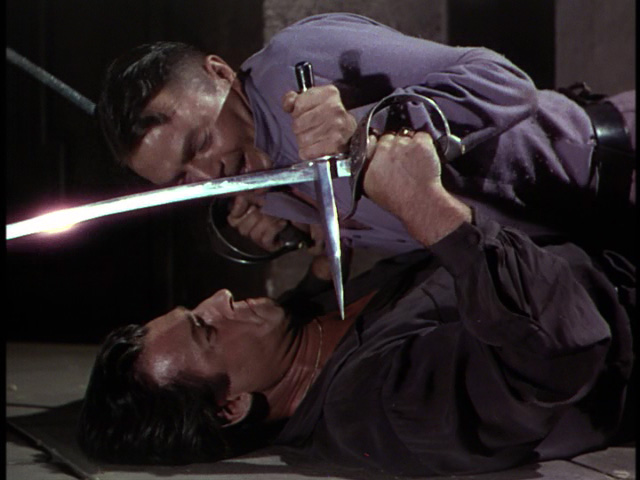 THE PRISONER OF ZENDA—- 1952 Technicolor redo of the 1937 hit is no earth-shaker, but is reasonably entertaining escapist fluff.  Workhorse director Richard Thorpe just had a huge hit with Ivanhoe, so MGM brass sensibly enough handed him the reins and a $1,708,000 budget.  Popular new star-throbs Stewart Granger, Deborah Kerr and James Mason took the leads, dangerously sexy Jane Greer, solid Louis Calhern and snide Robert Douglas fleshed out seconds, with Robert Coote and Lewis Stone thrown in for dressing.* 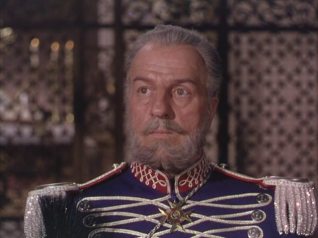 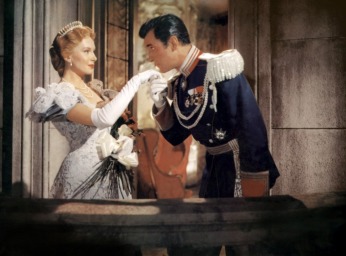 Scene-for-scene (nearly line-for-line) it covers the script from the earlier film, and they further scrimped by getting Alfred Newman’s old score reworked by Conrad Salinger.** Even many camera angles were copied by cameraman Joseph Ruttenberg to match in glowing color those done before in black & white by James Wong Howe.  Not lavish, yet it’s foofy enough and looks great, if maybe a bit too clean and safe with its set designs, backgrounds and standard crowd scenes. The costumes certainly get a workout, and you may notice that, though it’s set in the make-believe Balkan country of ‘Ruritania’ (neighbor of Fredonia?) in the last decade of the 19th-century, a lot of the bad guy uniforms look suspiciously close to more recently familiar Prussian-German-Wehrmacht duds (boo, hiss, grumble).

Granger does well enough playing the dual King hero; Kerr looks peachy, although her heroine is not much of a role and the character is weighed down with sappy love declarations, the kind of stuff that had boys roll their eyes or run to get more candy—they should have fiddled some to update that dialogue. Greer draws more attention—that’s some killer eye contact wielded with innuendo attached.

Best thing in the cast is James Mason’s sly, formidably ruthless villain; he steals every scene with that velvet voice and his obvious tickle at playing an utter swine. “Oh, and by the way, royal blood is not blue as most people think. It’s red. I know because I had to spill a little.”  He and Granger have a lengthy, no-gallantry-nonsense sword fight: why stick to fencing etiquette when you can cheat by thrusting a torch at your opponents face?

“There are moments in your presence, your highness, when I feel myself an amateur”.

The movie has a rather anti-climatic wrap-up of its 96-minute fable.  Nonetheless, Thorpe and court pulled in crowds to the tune of $5,629,000, pleasing the Metro brass enough that they gave him the megaphone later for period pieces All The Brothers Were Valiant,  The Student Prince, Knights Of The Round Table and Quentin Durward.

* Lewis Stone had played the lead in the 1922 silent version. There had been previous silents in 1913 and 1915, later came a disastrous 1979 comedy version with Peter Sellers, and numerous TV adaptations. Lampooned in a lengthy segment of 1965s The Great Race, it will no doubt be resuscitated when the need for fanciful lookalike-royalty adventures arises.  This one struck gold thanks largely to the quartet run-of-luck of the director and three leads.  Ivanhoe, set to battle earlier in ’52, was the most successful film in director Thorpe’s resume.  Granger was flush from King Solomon’s Mines (with Kerr) and the well-regarded Scaramouche, also 1952. Kerr had brought her luminosity to the marathon blockbuster Quo Vadis.  Mason delivered the superb Five Fingers this same year, following back-to-back scores Pandora And The Flying Dutchman and The Desert Fox.  The three actors may not have ranked this Zenda as any great shakes, but it’s audience popularity certainly didn’t hurt their burgeoning career tracks, even if everyone preferred the  ’37 Ronald Colman version.

Before all came the book, written in 1894 by Anthony Hope. Mr. Hope wrote 32 novels, a number of plays and non-fiction works and was described, when visiting New York as not unlike his king-subbing hero ‘Rudolph Rassendyll’—as a natty Englishman with soldierly bearing, dry wit, a confident and relaxed manner and more than a bit canny. 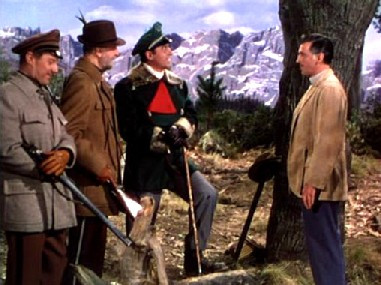 ** Barely mentioned today when people bring up the great Hollywood composers, orchestrator and arranger Conrad Salinger was highly regarded by his peers in the industry and amassed 142 often dazzling credits, many behind the scenes, over a 31-year career.  I recommend a neat piece in the blog “All Aboard For Skinker’s Swamp”, entitled “Conrad Salinger –Master Of The MGM Musical” —quite informative on this talented and historically neglected musical artist.