OF GODS AND MEN—-strong, reflective, thought-provoking, much-honored 2011 French drama about a tragic 1996 incident in Algeria, where seven Trappist monks ran afoul of the political-religious upheaval that tore the country asunder (that time). Under threat from Islamic fundamentalist terrorists, pincered by brutal and corrupt government forces, dedicated to their defenseless community, sworn to their unyielding faith, the monks have to decide whether to stay or leave: their lives in the balance.

“We are martyrs out of love, out of fidelity. If death overtake us, despite ourselves, because up to the end, up to the end we’ll try to avoid it. Our mission here is to be brothers to all. Remember that love is eternal hope. Love endures everything.”

Both inspiring and quietly chilling, the beautifully acted, directed and photographed story, scored with haunting Cistercian and Gregorian chants, locks attention from the first, and is one of the best in a strong slate of films that have tried to give some even-handed dimension to the dismally unending series of culture cataclysms plaguing northern Africa and the mid-East in recent decades.*

Shot in Morocco, in the harsh yet serene beauty of the Atlas Mountains (Algeria was a definite no-go), the director was Xavier Beauvois, who co-wrote with Etiene Comar.  Produced for $4,000,000, it found financial success internationally and drew near-unanimous critical praise, although some took issue that Beauvois & Comar evade greater political depth and controversy by focusing on the admirable purity of the monks sense of duty rather than prying into the less-righteous how & why that they were quite a few kilometers from France to start with: fair enough.

* The ‘Armed Islamic Group of Algeria’ claimed responsibility for the incident, but it’s possible that another mob of ‘Complete Total Assholes’ were involved, namely the Algerian army.  Blame flies like shrapnel in what esteemed journalist Robert Fisk aptly describes as “The Great War For Civilization” (one helluva book, in which no governments or authorities escape clean, only the countless victims). Back this superb movie with the likes of Incendies, Omar, Green Zone, Syriana.   For Algeria specific, look to the undisputed classic The Battle For Algiers, the recent Outside The Law and the forgotten 1966 Anthony Quinn actioner Lost Command.  Given Imperial carnage, religious intolerance, media frenzy, economic skulduggery, duplicitous motives, the ignorance level of Joe, Jacques and Ahmed Average and handy indiscriminate bombs of every make (thoughtfully supplied from everywhere) is it too cheeky to offer that if you can’t stand the neighbors, think about getting the hell out of the hood?  Nah, just consult God, that’s worked out swell…. 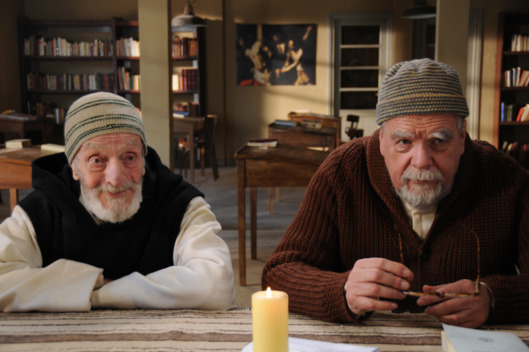