RETREAT, HELL!—-blasting its way out at the height of the Korean War in 1952, this effective, medium-sized, soberly presented combat flick managed to boost Marine Corps enlistment, even though it doesn’t make it look like shipping off to the freezing temperatures of the 38th Parallel is going to be much of a picnic.

Directed by Joseph H. Lewis, running fit at 95 minutes, it’s a pretty standard guts’n glory pounder, given co-operation from the Corps to accentuate production scale, mixing in some actual footage. 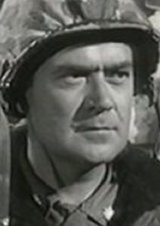 The always dependable Frank Lovejoy plays the iron-tough Colonel who must get Captain Richard Carlson fired up enough about the far-off Asian peninsula to forget his family problems and concentrate on his outfit. Training leads out of Camp Pendleton to the landing at Inchon and beyond.  Recruits include 18-year-old Russ (then Rusty) Tamblyn as the cocky, naive kid who quails at first blood, then becomes a Commie-waster extraordinaire.

William Lava makes sure his musical scoring has a full go at “The Marine’s Hymn”, and Lewis direction is straightforward and steady.  Memorable for sequences centered around the fabled fighting fallback (the ‘retreat’ of the title*) from the Chosin Reservoir, the ‘frozen Chosin’.  Waves of Mao Tse Tung’s ‘volunteer’ infantry sweep down off the snowy hills, bugles blaring, into the guns of the outnumbered Leathernecks dug in below. War film buffs will watch for this section alone.

The unhappy Korean War didn’t inspire many pictures, and they were all grim. This one hit pretty well with audiences, earning more than $5,600,000, bunk #44 for the year. With Anita Louise, Ned Young, Lamont Johnson and Paul Smith.