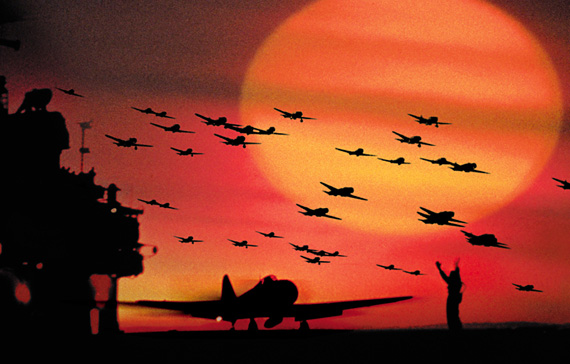 TORA! TORA! TORA! —massive scale 1970 epic details the Dec.7th, 1941 sneak attack on Pearl Harbor in Hawaii. The meticulous reconstruction of coups and blunders starts slowly, takes a good hour to build, then it picks up momentum until pulling all stops for the climactic holocaust.

While the outcome is not news, a pretty fair amount of suspense is generated, and even when the 143-minute spectacle is not mentally stimulating, it’s an unqualified visual eye-catcher. 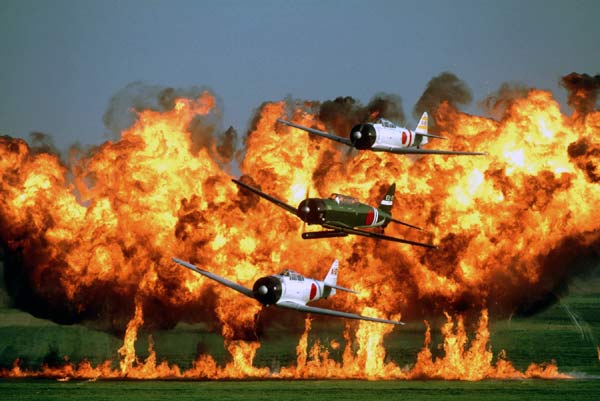 A dual American-Japanese enterprise, with the American scenes directed by Richard Fleischer, the Japanese segments handled jointly by Toshio Masuda & Kenji Fukasaku. They replaced Akira Kurosawa, who bowed out after spending two years on pre-production.*

Over $26,000,000 went into making it and the largesse shows on-screen in every production detail and technical credit.  Cinematography and color is rich, the sound effects, costuming and sets faultless, backed by an evocative, exciting, suitably grandiose score from Jerry Goldsmith (part of his Asian Trifecta along with The Sand Pebbles and The Chairman). His main title theme basically puts into three minutes of notes and sound the idea of Progressive Inevitable International Confrontation Resulting In A Holy Shitstorm. Guy was a genius.

The scripting is mediocre, and the acting varies between very competent to terrible.  On the American end, Jason Robards, Martin Balsam, James Whitmore, E.G. Marshall and a few others are well chosen but a large number of the bit parts are bona fide stinkeroos. Fleischer gets the blame for letting the inconsistencies pass unchallenged. 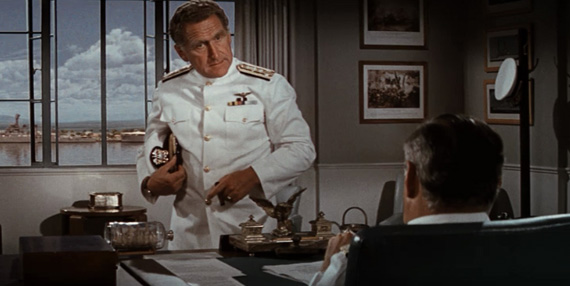 As for the Japanese directors, they selected a fine lot of solid types, but several of their scenes drag out interminably, with humorless admirals either barking or growling at each other. White subtitles against white uniforms doesn’t help, but if you have a coffee or skip the first half you’ll miss most of the dawdle.

When the attack hits, it’s a bonanza for the special effects crews, who provide some of the best large-scale model & miniature effects and awesome displays of fiery explosions of the pre-CGI era.  The shots recreating the titanic blow-up of the USS Arizona are wow-worthy show-stoppers.  Pyrotechnic wizardry goes head-on into stuntman insanity during the sequences of the strafing of Hickam Field, using a blend of vintage aircraft, working replicas and full-scale mock-ups.  Some of this stuff, like the obvious “run-for-your-life, Bob” bits are flat-out incredible. 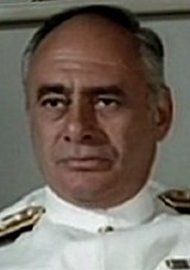 Critics at the time poo-poohed it, but it’s come to be well regarded over the years, and it looks all the better next to the 2001 CGI-dazzle & dramatic hogwash of Pearl Harbor. 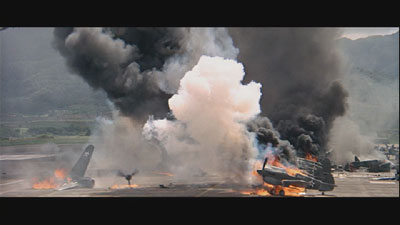 Nominated for Cinematography, Art Direction, Film Editing and Sound, it won the Oscar for Visual Effects. Box-office take came out to $44,00,000 in the States, #9 for the year, where it was considered a flop, but it did really well in Japan (no surprise) and elsewhere.

*Actually the legendary doyen of Nippon cinema didn’t just ‘step down’; he was removed by a harried Zanuck & frazzled Fox bigwigs for a number of reasons. He had a script of 400 pages—about four hours worth—just for his end of the film. He appeared to be having a nervous breakdown. Akira-san had the naughty habit of hiring personal pals, prominent industrialists and businessmen to work on the film, in order to gain financial favor for his forthcoming projects. He also manifested a charming trait of hitting subordinates over the head with a rolled-up copy of the script. Banzai!