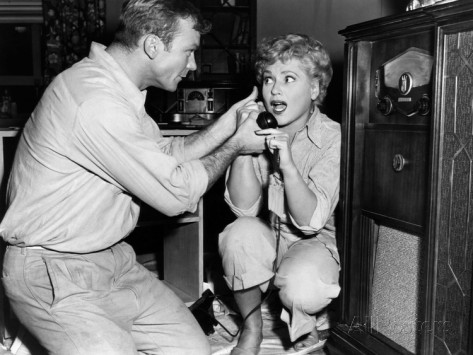 THE MARRYING KIND apparently disappointed audiences when it came out back in 1952;  since it starred Judy Holliday they were expecting a straight comedy. Instead they got a dramedy, with some tragedy and a lot of pungent, close-to-home arguments. Reviews were so-so, and today most write-ups unload sour apples on the movie.

Directed by George Cukor (who had steered Holliday to her Oscar for Born Yesterday ), written by Garson Kanin & Ruth Gordon; the comedy aces went for a more naturalistic, ‘everyday’ feel with their characters this time, and the setting is in drab apartment blocks and blue collar workplaces rather than the foofy estates and disposable income arenas of many of their previous works.

Here, Holliday is married (with a lot of problems) to Aldo Ray, and the story of their deteriorating home life is told via flashbacks while they see a divorce judge (silent star Madge Kennedy). Critics harp on the structure of the script, and for focusing more on the negative side of their coupledom, the latter element keeping crowds from making it a big hit (it had rentals of $1,700,000, the years #59 at the till).

Granting the lopsided nature of the portrayal, the honest performances and all-too-recognizable arguments ring true (today the plenitude of dialogue–there is a lot of talk–would be rife with obscenities), and hold interest for the quick 92 minutes.

Holliday shows the dramatic chops she could marshal to match to her unique daffiness, and newcomer Ray (with no previous acting experience–he’d had brief parts in two films under his real last name DaRe) is excellent. It’s startling to see the 27-year-old actor looking handsome and slim. He’d soon beef up into the familiar Ray of Battle Cry and God’s Little Acre and hadn’t started down the booze-path that helped sideline his career after the early 60s. Director Cukor took an interest in the actor, and followed this picture by giving him a good shot supporting Tracy & Hepburn in Pat & Mike. The two offbeat stars mesh well together and Miss Kennedy is fine as the patient, inquisitive judge. She had not acted in a film for 25 years, and never in sound.

Also helping is a rash of fresh newcomers: Mickey Shaughnessy (32, basically a debut, with only one bit part eight years earlier), who has a neat soliloquy that helps Ray shake some of his doubts; Peggy Cass (her debut at 28); Charles Bronson (here still Buchinsky, his fifth part at 31); Nancy Kulp (also 31, her second appearance) and Joan Shawlee (26, already busy with 21 bit parts since 1945, still seven years away from her most remembered role as ‘Sweet Sue’, brassy leader of the girls band in Some Like It Hot.)

Ignore disparaging reviews and give this a look for the fine work from the actors.