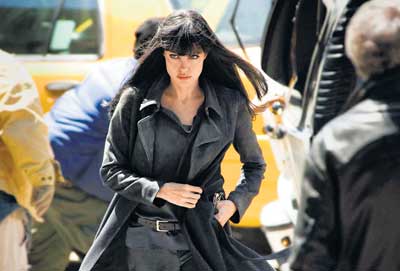 SALT  is a rip-snort showcase for Angelina Jolie at her most physically ka-pow-blammo asskicking best, as adept as any actress this side of Michelle Yeoh for convincing you she could snap your ribs and loosen your teeth while you’re goggling at her face and form. It helps that she can deliver lines and accents to a tee.

With echoes of the exciting 1988 Nelson DeMille page-turner “The Charm School”, the Kurt Wimmer script (with uncredited input from Brian Helgeland and Steven Zaillian) has CIA agent ‘Evelyn Salt’ (Angie) on the run after being accused of being a Russian sleeper agent from the Soviet era, waiting for the right Manchurian candidate cue to unleash a hell-storm of trouble. Is she?  Was she?  Who else is up to nogoodniks?  Don’t worry about connecting fussy dots closely, just enjoy the racing around, smash-bonk stunt fighting* and bad guy clock-cleaning, as Salt shows how to dish it out like a tigress, prodded by James Newton Howard’s tense scoring. 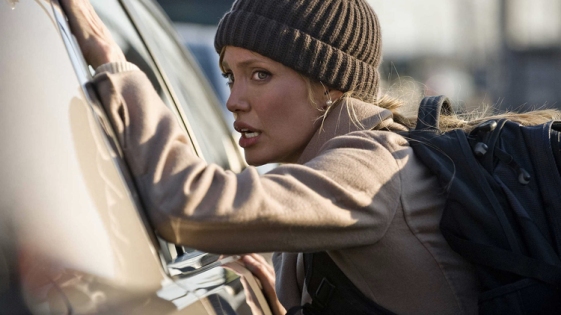 *Jolie, 35, trained up to employ a lethal mix: Kung Fu, Muay Thai, Jeet Kune Do and my favorite– Krav Maga—which sounds like all you have to do is say it forcefully and it will knock someone off a subway.