THE THING From Another World—-“I bring you a warning: Everyone of you listening to my voice, tell the world, tell this to everybody wherever they are. Watch the skies. Everywhere. Keep looking. Keep watching the skies.”    As the titles sear onto the screen, Dimitri Tiomkin’s truly other-worldly music marches at you with unstoppable eerie power, and in short order you are drawn into one of the great, formative science-fiction classics, an enduring cinema chiller.

Producer Howard Hawks gave the directing credit to Christian Nyby, who had edited Hawk’s classics To Have And Have Not, The Big Sleep, Red River and The Big Sky, but it’s generally conceded that HH was the guiding hand behind most of the shoot.

Regardless of who really steered between “Action!” and “Cut!”, the results are sustained and mounting suspense, likably naturalistic characterizations (apart from a violent vegetable) and no-nonsense pacing over a trim 87 minutes.

The Arctic. It was a mistake of the FUBAR variety to set off those thermite bombs on that ice-bound black sphere, so stalwart Kenneth Tobey and his crew of U.S. Air Force sentries have to pay the price for their curiosity. For once the romance afforded the leading man (via Hawks protegee Margaret Sheridan) doesn’t hamstring the plot; for once the supporting cast aren’t wiseacre stereotypes–it all clicks: the expert black & white lensing from Russell Harlan suggesting the deep isolation of the base camp, the restrained use of the title creature, making for greater impact when he/it/that shows up suddenly, the Hawksian overlapping dialogue.

The script not only took advantage of the growing interest in possible visitors from outside the atmosphere, but played off the public perception of science-going-awry, with dread over the Atomic Age. Here, it’s the cool heads of the military that deal with—well, things—rather than the myopic scientists who naively wish to ‘reason and learn’ from some galactic monster whose idea of communication is to use their blood as a cocktail. The fools!   “There are no enemies in science, only phenomena to be studied.” Oh, get real! No doubt they all wear glasses. As if the Commies aren’t pests enough. 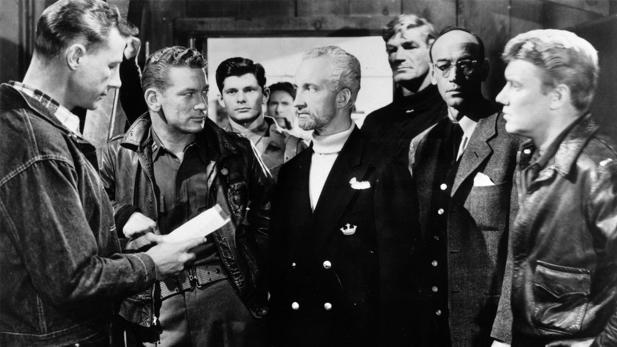 Great scenes: the crew realizes the size and shape of the craft in the ice; the Geiger counter starts to go crazy just before a door is opened and we come face-to-face with the seven-foot-tall “intellectual carrot“; the Thing’s rampage through the recreation room, doused with gasoline, flailing savagely, squealing away into the blizzard with sled dogs hanging on his arms; the catwalk cookoff. 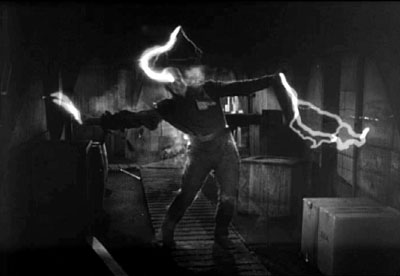 At 34, Kenneth Tobey had been in bit parts for six years before landing the lead here, he’d continue lending solid work in scads of films and TV roles until his final bow in 2005, spoofing 50s favorites he’d been in, which included It Came From Beneath The Sea and The Beast From 20,000 Fathoms.  He ‘watched the skies’ on the tube for 111 episodes of Whirlybirds. 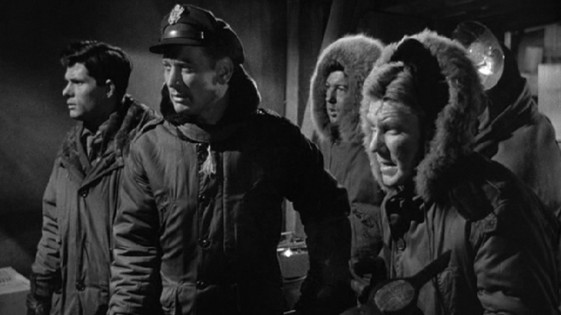 Coming out the same year as The Day The Earth Stood Still and When Worlds Collide, this film helped launch the wave of science-fiction epics of the decade, and earning $2,000,000 came in a surprising #46 of the years releases, proving to Hollywood that there was a viable market for a once-derided genre.  Remade in 1982, to initial disdain by critics and disappointing receipts, that version with Kurt Russell is now highly regarded as well (those of us who paid attention liked it all along). A prequel in 2011 is also effective and underrated. You can’t keep a good homicidal interplanetary Brussels sprout down.