EVEREST—-until some future daring, arrogant, super-rich explorer plants his or her ego atop Olympus Mons, on neighboring Mars, the 29,029 feet of Nepal’s ‘Sagarmatha’ will have to do.  Tibetans call her ‘Chomolungma’, but whatever name she’s adorned with carries a caution—the Mountain is in charge, despite your $70,000 worth of training and planning: if you go up, you have a good chance of not coming back.  As one character relates “The last word always belongs to the mountain.”  This dramatic 2015 visual knockout tells the story of the ill-fated 1996 attempt that left eight dead and others badly scarred.

“Human beings simply aren’t built to function at the cruising altitude of a 747. Okay, once we get above here, above the South Col, our bodies will be literally dying. And I mean literally dying. It’s not called the Death Zone for nothing.”

Directed by Baltasar Kormakur, it recounts a fateful combination of too many teams trying to ascend at the same time, errors in judgement, sudden storms, and plain bad joss. The script naturally drew criticism from various quarters for how it portrayed some characters and events (survivor/author Jon Krakauer was not pleased, for one), but from a strictly dramatic angle, it makes for tight storytelling, and a fine cast play without anyone showboating and dominating the proceedings.

On a comparatively frugal budget of $55,000,000, the technical end is of the highest caliber; the cinematography, sound and special effects are all splendid.  Well-reviewed, it took in $203,400,000.  Shot on location in Nepal, as well at studio in Italy. The production narrowly averted tragedy as the second-unit was still shooting on the mountain when the 2014 avalanche occurred, killing sixteen Sherpas. 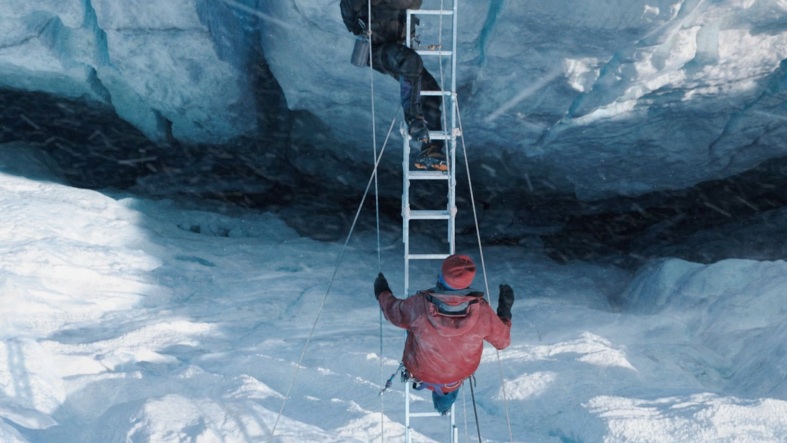 From the vantage point of someone who’s been lucky enough to do the Everest Base Camp Trek (no climbing for this guy, I’m not that loony) in staggeringly beautiful Nepal, the location’s glimpses bring back eternally cherished memories of trippy Kathmandu, Lukla and its insane airstrip, striking Namche Bazaar and the isolated monastery at Tengboche. What a land, what marvelous people.