YOUNG GUNS —being a western fan since before I was able to spell “Pilgrim!” (the one with an apostrophe, ala The Duke, not the boring old clowns in funny hats), I quailed a bit when I first heard about this 1988 entry, with its cast of Hollywood Bad Boys of the day, and with a rock music score, yet.  A pleasant surprise then, to find this so fond of the genre and so full of energy. The cinema cowboy contingent had been playing with their own self-consciousness (you try it) since, oh hell, Rio Bravo at least, and this one hits all the right spots with flinty dialogue from crusty, cussin’ characters, and enough keister kickin’gunplay for three movies.

The rock & roll soundtrack fits seamlessly into the horse riding and the scenery, with wailing guitars echoing the gone-forever settings. Gone, maybe, but not forgotten in this rework of Billy The Kid, played possibly the best he ever has been, by Emilio Estevez.*

All the young actors are perfectly acceptable hombres, so snark over their obvious box-office placement for younger crowds is moot.  Brian Keith has a great cameo. Fine photography of those bright Arizona and New Mexico locations from Dean Semler, good sound for the assorted ordnance and sharp direction from Christopher Cain keeps all the young bucks in line.

At a cost of $11,000,000, it came in a hit with $46,000,000 just in the States alone.  The youth gang besides Emilio are Kiefer Sutherland, Lou Diamond Phillips, Charlie Sheen, Dermot Mulroney and Casey Siemaszko, while along with Mr. Keith the old hands are Jack Palance, Terence Stamp, Terry O’Quinn and Patrick Wayne.  Tom Cruise has an unbilled die-on during the climactic shootout.  103 minutes.  Sequel was not bad, either. 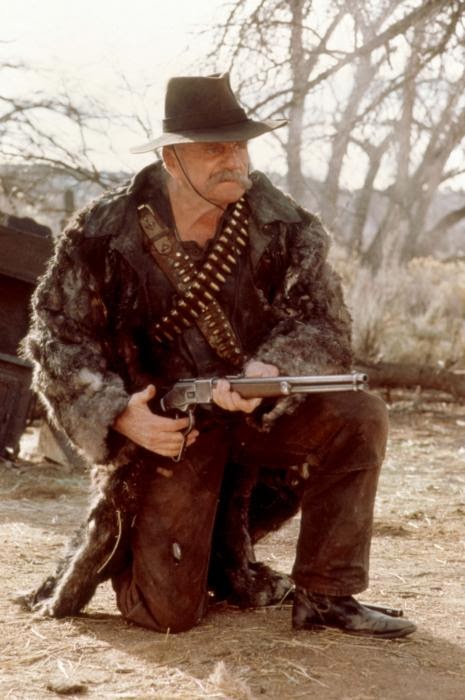