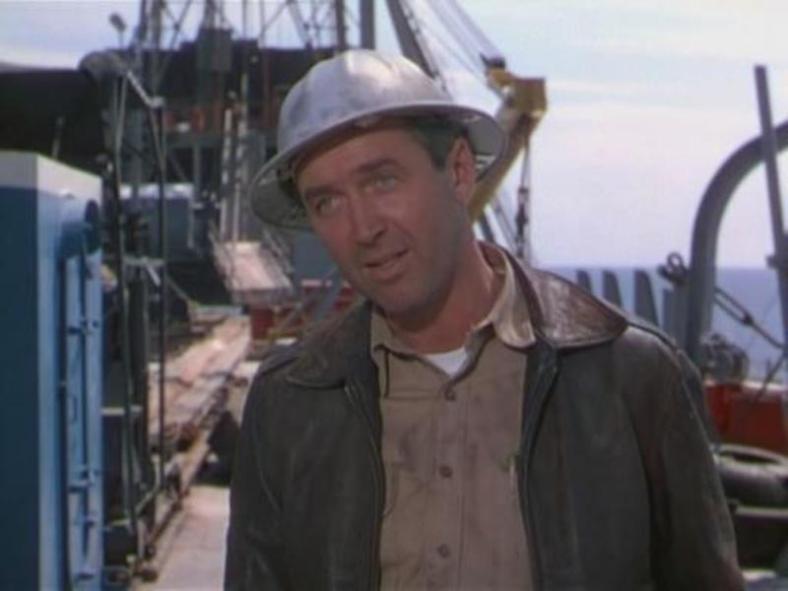 THUNDER BAY  is, despite a game cast and able production team, a pretty lame exercise at adventure-drama, with two oil wildcatters (James Stewart and Dan Duryea) locking horns with shrimp fishermen (led by Gilbert Roland) over a piece of the Louisiana Gulf Coast.  Oil or shrimp, which is more important, which will win out?  Guess.

The most pedestrian of eight collaborations between Stewart and director Anthony Mann, it has little in the way of action, levity or insight to hook a look: it came in #30 for the moneymakers of 1953, drilling up $7,300,000.  A 102-minute yawn, with Joanne Dru, Jay C.Flippen, Antonio Moreno, Harry Morgan and Fortunio Bonanova.

The movie’s real claim to fame—make that infamy—comes in hindsight,of both the  bitterly sad and blackly humorous variety, with the eventual near-destruction (make that ongoing) of the Gulf of Mexico by oil company pollution, exemplified by the catastrophic Deepwater Horizon spill of 2010. The script’s rah-rah over petroleum doesn’t smell so sweet anymore.