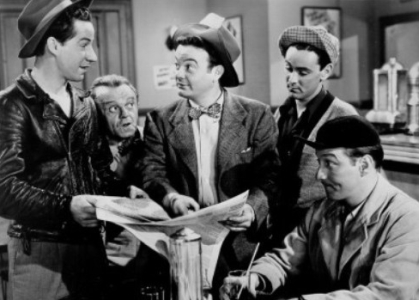 THE BOWERY BOYS —-I loved ‘The Bowery Boys’ movies as a kid; their simple plots, brief running times, goofy gags and fisticuffs enough to keep me occupied before playing with my monster models or dreaming about Carroll Baker, but it’s a sad fact that they don’t hold much water fifty years down the pike.  Okay, they were not exactly in competition with Eugene O’Neill, or Eugene the weird kid on the next street over, but it’s almost a sacrilege to consign ‘Slip’ (Leo Gorcey) ‘Sach’ (Huntz Hall) ‘Whitey’ (Billy Benedict), ‘Gabe’ (Gabriel Dell) and the rest to palookaville–let alone ‘Louie Dumbrowski’ (Bernard Gorcey).

But times change, gray hairs move in and refuse to be evicted, and it’s gonna take One Helluva Special Woman to still love me if I make her watch one of them all the way through.  Can’t recall them all (don’t know what I just went downstairs for), but know I caught a slew of the record forty-eight in the series, such as (come back with me now, Boomers): Fighting Fools, Angels In Disguise, Master Minds, Blues Busters, Bowery Battalion, Crazy Over Horses, Hold That Line, Feudin’ Fools, Jungle Gents, High Society, Spy Chasers, Dig That Uranium and Spook Chasers.

Most of the regulars had been recruited in New York for the 1935 play production of Sidney Kingsley’s Dead End, a success which in turn became a hit movie in 1937, with the guys carted out to California to repeat their roles.  ‘The Dead End Kids’ (who were a headache for the studios because of their real-life behavior) went on to feature in six movies, including the classic Cagney slap-instruction-manual Angels With Dirty Faces.  A few years run as “The Little Tough Guys” morphed into 22 features as “The East Side Kids”.  I never caught any of these, as I guess they were either deemed too ancient to market on TV or it just made sense to go with their next and final incarnation from 1946 through 1958 as “The Bowery Boys”.

All told, from Dead End to In The Money (did I see that?–probably) the gang of wiseacres appeared in 89 features and three serials.  That’s a lot of malaprops.