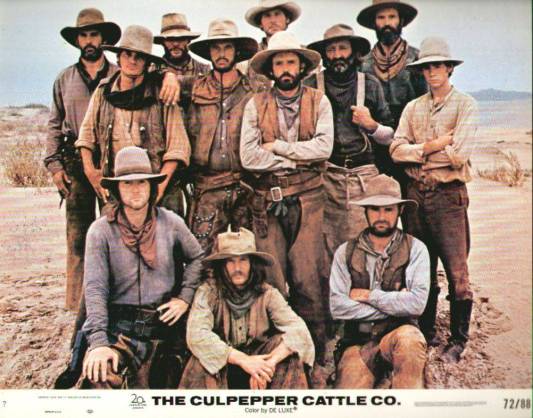 THE CULPEPPER CATTLE CO. was part of a slew of revisionist westerns that bludgeoned a bloody, grimy trail into 1972.  I liked it quite a bit when I was one of the few who saw it then (it only made around $3,800,000, enough to cover its bare-boned $1,000,000 outlay), but much of what I thought was tough & real at a fast-drawing 17 comes off looking overdone from the porch of a pasteurized cowpoke chewing on 65.

Youthful Gary Grimes, fresh from young love in Summer of ’42, is again naive as he joins extra-terse ‘Frank Culpepper’ (Billy ‘Green’ Bush) and his hard-bitten crew, aiming to push a mess of steers north in 1866.  Run-ins with assorted grungy varmints decimate the team and a quartet of happily murderous ruffians are recruited to finish the drive. More trouble waits on the horizon. 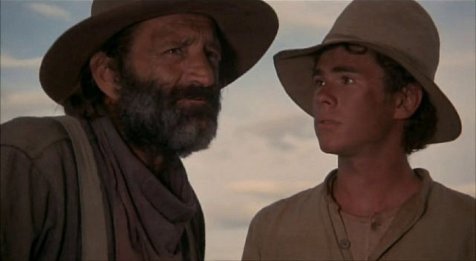 It’s a violent 92 minutes, with several bloody gunfights. One, staged in the close confines of a frontier tavern, comes off with quick, vivid excitement, but the other action scenes, while dramatic, are no more likely than those staged in the earlier westerns that this type of ‘realism’ supposedly shows up—they just spill more squib sauce.

Granted, it’s a trail drive, and There Will Be Dust, but the layers of filth covering everyone, all the time, during the sepia-tinted oaters of this era* are carrying ‘authenticity’ into something akin to carbon-dating. These people are dirtier than than the original hunter-gatherers of Quest For Fire.

Some funny lines get thrown around, and the cast is good, even if the script makes their actions as unlikely as they are unpleasant; the finale is ragged and lazy.  Jerry Goldsmith’s score recycles his pretty main theme used six years earlier in The Flim-Flam Man, but only buffs as nutty as me would notice. The topographic changes in the scenery (too varied), and the weapons used (anachronistic) don’t add up either, if you want to get picky (fair ’nuff, since this’n poses as accurate). 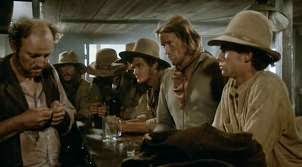 Effective cinematography courtesy of Lawrence Edward Williams and Ralph Woolsey does get at some Remington effect, under the direction of first-timer Dick Richards, who genre-skipped to varying effect in his brief directorial career (comedy with Rafferty And The Gold-Dust Twins, detective noir in Farewell My Lovely, Foreign Legion epic ala March Or Die and slasher spooking with Death Valley.) 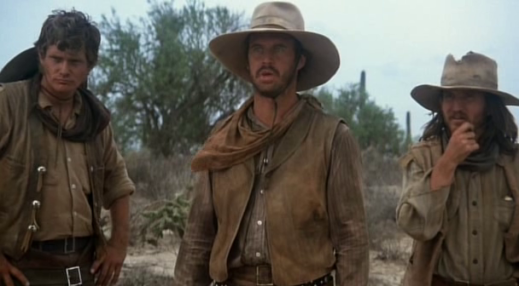 Grimes is okay; after beginning the coming-of-age process in the arms of Jennifer O’Neill on Summer of ’42, he tackles the next logical step in American boy-to-man progression: using a six-shooter.  The always interesting Billy ‘Green’ Bush was on a 70s roll.  Snarling putdowns and spitting lead are other busy young turks of the day Geoffrey Lewis, Luke Askew, Matt Clark, Anthony James and young pup Charlie Martin Smith, in his movie debut at 19.