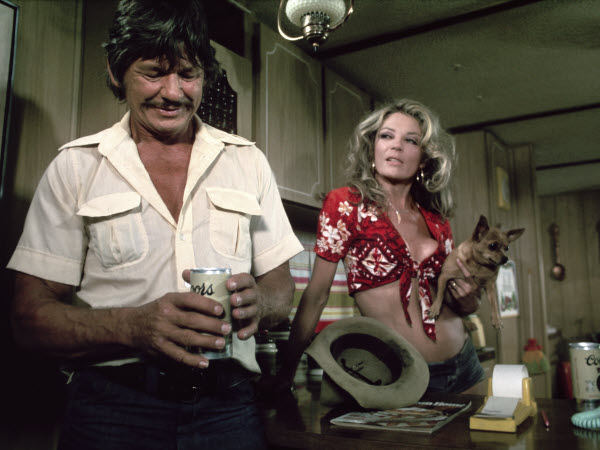 BREAKOUT  broke out another box office score for Charles Bronson in this fragmented but fast and fun 1975 adventure, which has the flint-eyed star trying to spring Robert Duvall from a Mexican prison (shot in France, because Mexico was not too pleased with the idea).

Based on a true story, the three-man script, taken from a three-man book, seems to pull in six different ways, with the ‘how comes’ of the plot-line never very clear, less credible, and director Tom Gries didn’t steer his editor into making things more than jumpy.

While the package isn’t seamless, its 96 minutes loads enough action-comedy to please fans of same, thanks to the mostly personable playing of the cast. Best of them is the studly Charles himself, physically whipcord as ever (really, was there a more ‘cut’ 54-year old in the hemisphere?), but dropping his usual isolate steeliness in favor of a wry, ingratiating tongue-in-cheek attitude that helps gloss over the scripts shortcomings.

Randy Quaid is amiably goofy, Alan Vint pleasantly gung-ho, while the always good, always eye-catching Sheree North enjoys herself as a slightly tarnished femme fatale on the side of right. Sexy lady. Partisans of The Wild Bunch will be happy to see Emilio Fernandez being thoroughly rotten again,as the warden, and lovers of movie music can please their ears with another Jerry Goldsmith soundtrack.