THE LAST HUNT  brought in $2,983,000 back in 1956, a goodly sum but not enough by Hollywood accounting to cover MGM’s $2,121,000 outlay. Decent reviews helped, though it had to contend in a flush year for westerns, with at least thirty kicking up dust. The Searchers stole the thunder from the lot. This isn’t up to that level, but it’s a worthy shot at something more adult and thoughtful than standard prairie fare. 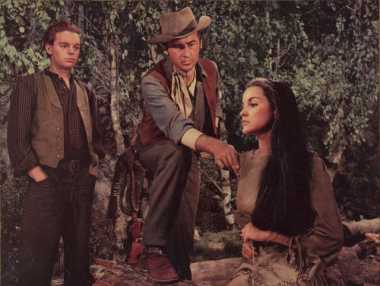 Audiences possibly didn’t flock as much as hoped because the movies downbeat theme honed in on one of the West’s most appalling consequences, the near annihilation of the buffalo.  Heightening realism, cynical writer-director Richard Brooks, not known for pulling punches, shot extended footage of herds being culled by rifle in South Dakota, and it’s not a pretty site.

A seasoned team goes out to make a literal killing off the vanishing beasts, and their personalities, motives and desires clash to the murder point. Rough but fair, disillusioned Stewart Granger has to deal with kill-crazed (and Indian-hating) Robert Taylor.  Indian captive Debra Paget, philosophical coot Lloyd Nolan and young mixed-blood Russ Tamblyn complete the desperate circle. 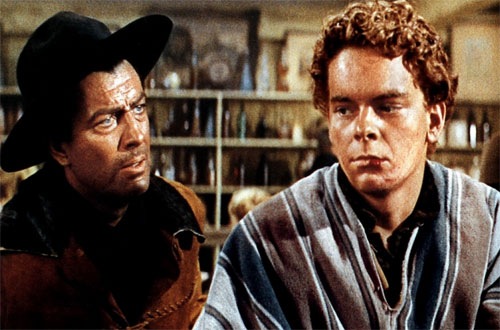 Heat stroke or not, Granger is fine, and gets to indulge in an amusing tavern brawl. Nolan rips into a great soliloquy that I bet both he and Brooks thought would cinch a Supporting Actor nomination (the old pro never received Academy recognition during his long career). Paget and Tamblyn are all right, but the movie’s acting honors belong to the historically unsung Taylor, who gives it his all as the lustful, vicious, increasingly unhinged threat to anything that breathes. It’s his best work.**

*Figures vary, but according to the Inter Tribal Buffalo Council an estimated 31,000,000 buffalo were killed between the years of 1868 and 1881 with only 500 left by 1885.  If that sick ecocide isn’t enough, ponder those ‘sportsmen’ who line up today to get a chance to test their ‘skill’ against the big,unaware standing targets.  Culling is one thing—blasting them because you want to see what it’s like to do so?—join the Marines if you’re so manly. What, no takers?  Bad back?  I thought so.

**Granger on Taylor: “He was such a nice guy, but he had even more hang-ups than I had. Bob Taylor was the easiest person to work with but he had been entirely emasculated by the MGM brass who insisted that he was only a pretty face. He was convinced he wasn’t really a good actor and his calm acceptance of this stigma infuriated me.” 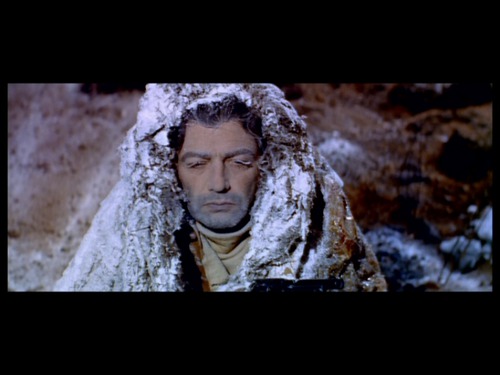