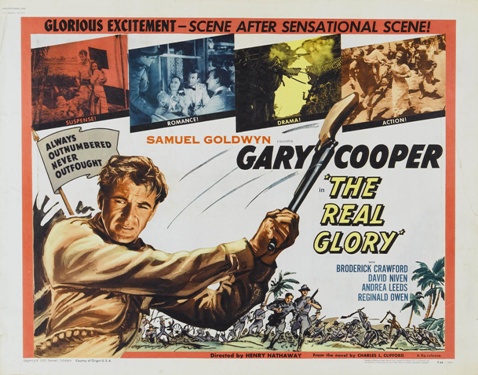 THE REAL GLORY   nonchalantly offers the kind of benevolent condescention that’s the lighter side of racism in its Stand Back And Let The White Man Show You How storyline.  This time around it has superstitious Filipinos as the beneficiaries of Good Will (advice, medicine, firepower). Using the ‘Moro Rebellion’ in 1906 as its linchpin, it manages to deftly sidestep the brutal Philippine ‘Insurrection’ that helped pave the way for it.*

Directed apace by Henry Hathaway, its jingoistic foolishness that was embarrassing in 1939 when it came out (landing #34 during that packed year) let alone in what-we-hope are more racially/culturally enlightened times (the word ‘hope’ included for irony, if you’re paying any attention to your fellow citizens).

As an action piece, it’s okay, though some of the wild stunts  during the climactic mop-up are pretty dang ridiculous. Brod Crawford was once young (!), at 28 here, still merely husky and not yet prone to roaring his lines like an angry hippo. Niven, at 29, was stuck playing catch-up as second-lead ‘pal’ to leading men, in this case the ever-stalwart Gary, who was riding an unbroken string of hits. Cooper’s skills aren’t taxed much here in 96 minutes of hokum, with Reginald Owen, Andrea Leeds, Kay Johnson, Vladimir Sokoloff and as many  Californian-Filipinos as they could entice to be extras. 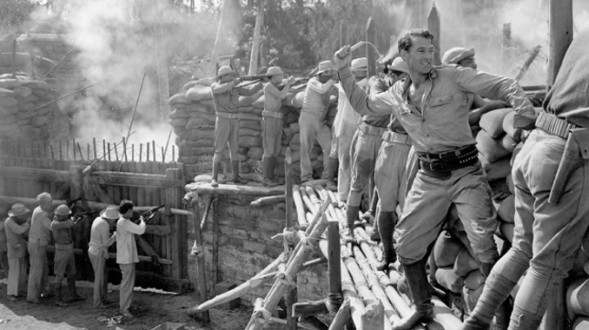 * For an in-depth take on how this seemingly innocuous Hollywood action flick strikes most of the wrong notes, read “American Tropics: Articulating Filipino America”.by Allan Isaac.  The Moro Rebellion lasted years, and was just part of an on-again/off-again tussle between tribes, faiths and those caught between that has sliced wounds across the southern Philippines for centuries. It continues today, with the added mauling of terrorist associated groups like Abu Sayef, and one notable bunch, the Moro Islamic Liberation Front—MILF (laugh, I always do–but from a distance: they’re not kidding).