TEN TALL MEN —–forgotten comic-action hijinks from back in 1951, easily the weakest of a quintet of adventure flicks Burt Lancaster smiled and leapt through between 1950-54. After making bones in a slew of film noir efforts, Burt shrewdly bounced between serious dramas like Come Back Little Sheba and From Here To Eternity to escapist romps—The Flame And The Arrow, The Crimson Pirate, South Sea Woman, His Majesty O’Keefe and this Foreign Legion goofball.

Rowdy, rule-tweaking legionnaire Burt and the nine guys he leads must infiltrate the wily Rifs about to attack, and rescue a sheiks daughter in the bargain. Could there be romance between volleys? It no doubt played well for kids at matinées of the era (grossing $3,970,000), and on TV later, but, unlike those mentioned above, that can still tickle, it’s too forced and dodo to hold scrutiny today. 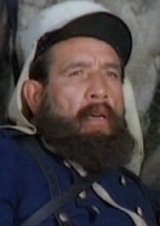 Directed by Willis Goldbeck, who walked away after fighting with Burt, and was replaced by Robert Parrish.  Neither of them made anything of the ridiculous action scenes on phony sets and could do little to help out the solid cast with the strained comedy elements.

In todays rancorous clime, with heightened and long-overdue sensitivity to other cultures, the comic-book portrayals of North Africans (here the Berbers of Morocco) could surely offend, although in some right-wing circles the opposite seems locked into DNA, with everyone south of the Mediterranean forever suspect (apart from Fort Israel).