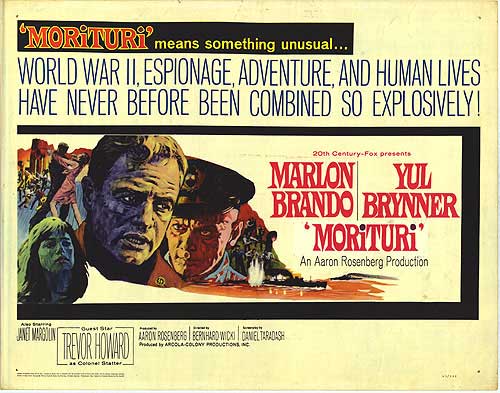 MORITURI  is a dark, intense espionage drama, set in 1942, as a German freighter leaves Japan for the 15,000 mile trip home, carrying a precious cargo of 7000 tons of rubber. British Intelligence blackmails a German pacifist into joining the crew, masquerading as an SS officer. His job is to divert the ship into Allied hands.

The first mate is a gung-ho Nazi, but the captain scorns the swastika. Also on board are political prisoners, who make up a chunk of the crew. Two-thirds of the way, this thickly plotted 1965 story is taut and engrossing, its offbeat theme working so well you allow for implausibilities and that almost every German on the boat is anti-Hitler. 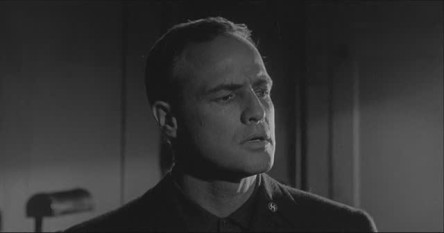 The acting is excellent by all concerned, with saboteur Marlon Brando and captain Yul Brynner doing some of their best work of the decade. Camera and scoring are strong, as Jerry Goldsmith indulges himself on the music, giving Conrad Hall’s shadowy lighting as much excitement as moodiness.

But director Bernhard Wicki and screenwriter Daniel Taradash damn near founder the vessel in the final third, cramming more subplots into the already packed scenario. The ship picks up the survivors of a torpedoed American craft, including a young Jewish woman (Janet Margolin) who escaped a concentration camp and wound up in Australia. The most hateful group in the movie are the US sailors they rescue, who are more anti-Semitic than the Germans, taking time to degrade the girl down in the hold, as she pleads with them to help the Good Germans take over the ship.

Yeah, yeah, so everyone is guilty, and who were the good guys?, and why did we fight the war?, and ‘ve voss chust folliwink ze orhdiss‘. Whatever the heavy-handed message might be, its greatest effect is to take a fine adventure and shoot it full of gaping melodramatic holes, hamstringing the hard work in the bulk of the film. It flopped critically  and at the box-office (making $3,000,000 on a cost of $6,290,000), despite having a name change to The Saboteur: Code Name Morituri. 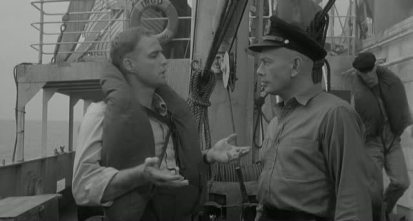 Brando hoodwinked Trevor Howard into a supporting role, despite Howard’s bitter experience working with the beyond-trying actor in Mutiny On The Bounty.  It was calculated as part of an image-repair move, since Marlon had been getting flayed in the press and throughout the industry for his work habits and for a procession of failed efforts (this didn’t stop until 1972 and The Godfather). But, as usual, ego won out and he clashed with the director. The Cinematography and Costume Design were Oscar nominated.