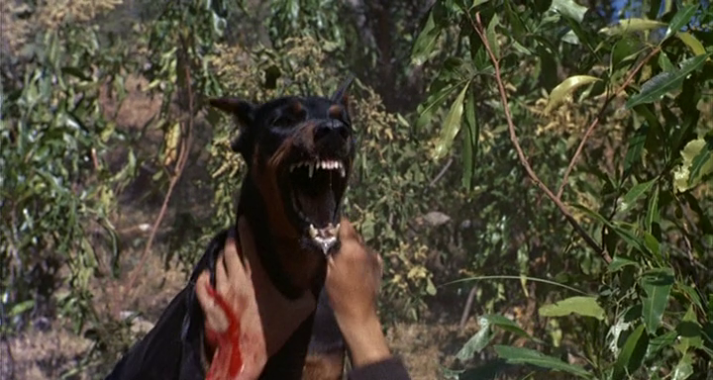 RUN FOR THE SUN—–good little adventure, taken from short story “The Most Dangerous Game”. A World-wise & weary writer (Richard Widmark) and a fearless lady reporter (Jane Greer) crash-land their small plane in a jungle region ‘south of the border’.  They become the guests, then the prisoners, finally the prey, of a couple of nasty types who fled Europe after Adolph bit the Big Tamale.

Trevor Howard makes an intelligent villain and Peter Van Eyck is in his sarcastic forte as the second menace. Greer is okay. Widmark is excellent, in that hard-boiled, taunting manner of anti-hero at which he excelled throughout the 50s and 60s.

This 1956 matinée has tension in its 99 minutes, thanks to direction from Roy Boulting, who co-wrote the adaptation of the Richard Connell classic with veteran Dudley Nichols. Shot in Mexico, it almost proved fatal to Greer, who did some injurious stumbling about in some swamp water and contracted a rare virus called Coxsaci V. This evil bacterium first laid her low for some weeks, then began a five-year incubation as it did its peculiarly evil work, which is to erode the protective pericardium membrane around the heart. A life-perilous operation resulted, but Jane pulled through, albeit with a long break from work.