GERONIMO—–so, Chuck Connors is six-foot four and has blue eyes….It takes a while to forget the casting while you’re watching this standard account of the wily Apache chieftains war with the US Cavalry in the 1880s, and if you get past ‘Lucas McCain’ in a loincloth, you still must deal with Ross Martin as ‘Mangus Colorado’. 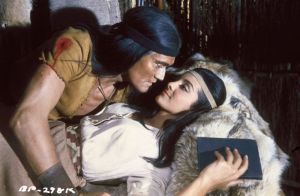 Indian (as in ‘India’) beauty Kamala Devi plays the warriors wife (Chuck and Kamala married after filming), Pat Conroy is the mean soldier, Adam West the good one. Smaller roles for Denver Pyle, John Anderson, Lawrence Dobkin and Armando Silvestre. As an accurate document of the way things were, it’s a joke, as a time-filler western matinée, it’s passable.

For heightists among you:  Geronimo was five-foot eight.  Mangus, on the other hand, was actually quite huge for an Apache, something like six-foot seven (big anywhere). Better bet for the storytelling is Geronimo: An American Legend, from 1993.